You are at:Home»Relative Value Channel»A Sour Ride For The Cocoa ETN 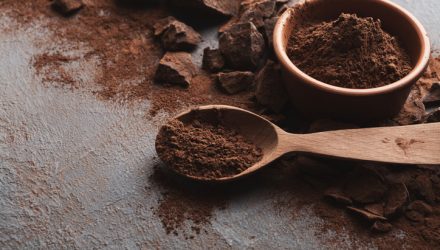 A Sour Ride For The Cocoa ETN

Veteran commodities traders know that cocoa is one of the most volatile members of the asset class. The Path Bloomberg Cocoa TR Sub-Index ETN (NYSEArca: NIB) has recently been proving as much and the exchange trade note’s Friday tumble confirms cocoa is an often turbulent bet.

The El Nino weather pattern could also factor into cocoa volatility. For commodity traders, the rising temperatures have disrupted normal weather patterns, leading to powerful typhoons, spoiled cocoa harvests in Africa and fires in Indonesia, which may leave opportunities to pick and choose commodity exposure.

“An ETN is a senior, unsecured debt security issued by a bank, unlike an ETF which holds assets such as stocks, commodities, or currencies which are the basis of the price of the ETF. The return of an ETN is linked to a market index or other benchmark,” according to Fidelity. “An ETN promises to pay at maturity, the full value of the index, minus the management fee. Like any other debt security, the investor is subject to the credit risk of the bank issuer.”

Ghana, one of the world’s largest cocoa producers, is playing a role in the commodity’s recent struggles.

“Cocoa purchase volumes in Ghana are plunging as farmers’ crops are being decimated by disease, according to people with direct knowledge of the matter,” reports Bloomberg.

The recent trade war activity may have burned an image of volatility in investors’ minds that could drive their decisions with their portfolios for the rest 2019. As far as being a predictor of what may happen in the global economy, commodities might actually be a more reliable crystal ball. However, the outlook is murky at best for cocoa.

Ghaha, the “world’s second-biggest cocoa producer bought 2,758 tons of beans from purchasing agents in the first two weeks of the light harvest through July 4, a decline of more than three-quarters from the same period a year ago, said the people, who asked not to be identified because they’re not authorized to speak publicly about the matter,” reports Bloomberg.

“Ghana has experienced an unusually severe outbreak of swollen-shoot virus, which can deform cocoa pods and reduce yields,” reports Bloomberg. “The country’s cocoa regulator originally forecast 900,000 tons for the combined main and light crop, but cut its estimate to 850,000 tons and then 800,000 tons, people familiar with the matter said previously, after the disease affected crops in its biggest growing areas.”