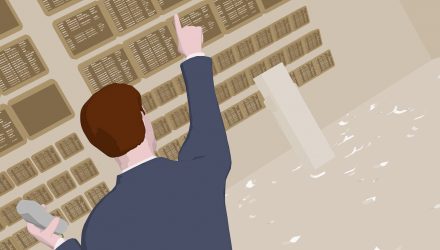 Stocks such as Apple (NASDAQ: AAPL), Google parent Alphabet Inc. (NASDAQ: GOOG), Facebook Inc. (NASDAQ: FB) and Microsoft Corp. (NASDAQ: MSFT) are pivotal to QQQ’s performance. With those factors in mind, it is increasingly risky to forecast when QQQ will even modestly pullback.

“Even more impressive, QQQ has now established a convincing foothold atop the round $180 level, which is quite the formidable price point. In addition to the usual psychological significance associated with round-number levels, QQQ $180 also happens to be the site of a 15% year-to-date gain, a 20% advance from the Feb. 9 intraday low, and the site of more than 90,000 call options set to expire within the next month,” according to Schaeffer’s Investment Research.

With technology’s ascent and that of QQQ, come concerns that the Nasdaq-100 is too heavily exposed to a small number of stocks. Additionally, some analysts opine that the benchmark’s significant technology overweight leaves it vulnerable should tech stocks fall out of favor. Due to tech’s ascent this year, QQQ’s exposure to the sector has increased while its consumer discretionary weight has been mostly steady. Those two sectors combine for over 82% of QQQ’s weight.

The S&P 500 technology sector has contributed to more than three quarters of the broader index’s gains, according to S&P Dow Jones Indices.

After surging 37% last year, technology remains a favorite among investors, despite data suggesting technology stocks are relatively expensive as they trade at elevated price-to-earnings compared to the broader S&P 500.