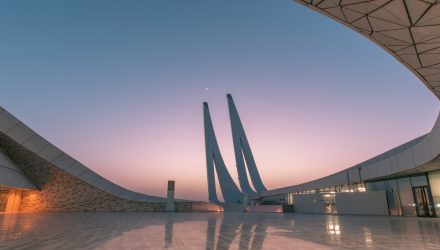 A Qatar country-specific ETF was leading the charge Wednesday as the Qatari markets more-or-less recouped its losses suffered since enduring an embargo that began last year.

The iShares MSCI Qatar Capped ETF (NasdaqGM: QAT), the lone Qatar equity-related ETF, gained 2.4 Wednesday and was up 5.4% over the past year.

Qatar’s main stock benchmark, the QE Index, was trading at levels not seen since May 2017 before countries in the region, including Saudi Arabia and the United Arab Emirates severed economic and diplomatic ties with the country over links to Iran and the alleged funding of terrorism, Bloomberg reports.

The emerging market has increase more than 18% so far this year, paring loses experienced last year, after raising foreign ownership limits for their stocks, which helped allow for a larger weighting in widely observed benchmarks from firms such as the MSCI.

Foreign investors can now own 100% of the shares to some Qatari companies and invest in banks and insurance companies.

Qatar’s Ministry of Economy and Commerce stated that the revision to the existing laws was meant to bring in foreign capital to all sectors of the economy. The changes would facilitate investor entry into the market and raise confidence in investment security.