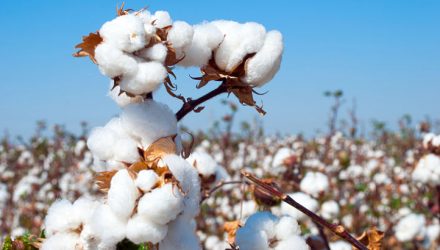 The iPath Bloomberg Cotton Subindex Total Return ETN (NYSEArca:BAL) is among the commodities exchange traded products getting drubbed this year. BAL is off more than 9% over the past month and labors 21.2% below its 52-week high, putting it in bear market territory.

Data suggest some commodities traders are remaining bearish on cotton, potentially putting more of a squeeze on the already faltering BAL. The cotton market has remained depressed for years on uncertainty over large Chinese state reserves as Beijing hoarded cotton to build up a price support program for farmers India, the largest cotton producer, has imported bales to restock after heavy exports last year. Indian farmers have also suffered through damaging pests and late monsoon rains.