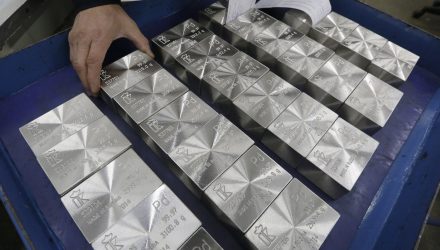 Continuing an ascent that started last year, the Aberdeen Standard Phys PalladiumShrs ETF (NYSEArca: PALL) is surging again in 2019. The largest palladium exchange traded fund listed in the U.S. appears to have broken out on a technical basis on Thursday, surging more than 3% in early trading.

“The precious metal, primarily used in the auto industry for catalytic converters, has surged more than 65 percent since the middle of August,” reports Bloomberg. “The bull run has been driven by an acute shortage of immediate supply as car manufacturers scramble to get ahold of the metal to meet more stringent emission controls.”

Trade talks between the U.S. and China are also seen as pivotal to palladium’s fortunes. Consequently, with trade war speculations easing between Beijing and Washington D.C., the outlook on U.S. car sales to this Asian emerging market is improving, along with the potential demand for palladium used for catalytic converters.

A major catalyst for palladium’s run dating back to last year has been expectations for supply deficits.

“The metal will remain in a supply deficit for an eighth straight year, according to Metals Focus Ltd. Palladium’s status as a byproduct of mines in South Africa and Russia means output levels aren’t adjustable to meet short-term demand, despite the surging price,” according to Bloomberg.