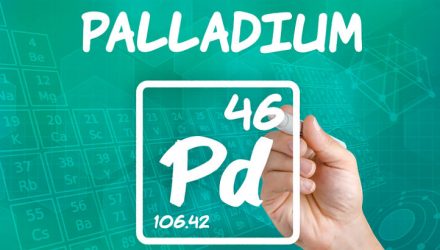 Power for the Palladium ETF Up 29% YTD

There has been plenty of talk this year regarding struggling commodities, but do not tell that to the ETFS Physical Palladium Shares (NYSEArca: PALL). Up nearly 5% over the past week, PALL is higher by more than 29% year-to-date, making it one of this year’s best-performing commodities ETFs.

“Palladium jumped 7% on Friday alone, spurred by co-called backwardation in the market. Backwardation is a phenomenon in commodities where the futures prices for an asset are below the spot price, which normally causes a sharp short-term rally,” reports ETF Daily News.

Auto sales are expected to hit another record in 2017 for the eighth consecutive year on rising demand in emerging markets and from those in the U.S. seeking to replace older vehicles as stronger global economic growth and low gas prices help support consumer demand.

“The background for palladium is for good industrial demand and likely a significant market deficit this year, and on top of course you’ve got this speculative squeeze,” Mitsubishi analyst Jonathan Butler said, reports Reuters.