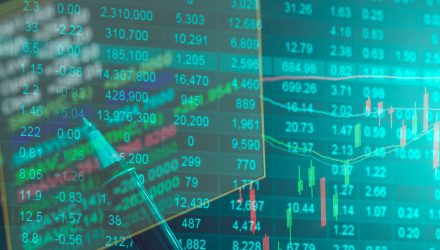 However, many investors quickly assume that venturing outside the U.S., even into developed markets, means embracing added volatility. There are ways to deal with that scenario, including with the Invesco FTSE International Low Beta Equal Weight ETF (NASDAQ:IDLB).

“Investors with a large home bias are not only concentrated geographically, but also may not be nearly as diversified across sectors as they believe and might risk missing their financial goals as longer-term trends shift with the start of a new global economic cycle,” says Jeffrey Kleintop of Charles Schwab.

IDLB holds 784 stocks, none of which exceed a weight of 0.31%. That’s truly diverse. As has been widely noted, ex-U.S. developed markets stocks, broadly speaking, often trade at discounts to the S&P 500 and other domestic benchmarks. Additionally, it’s often said that some of equal-weight ETFs’ ability to outperform cap-weighted indexes comes by way of value exposure.

IDLB, which debuted in November 2015, doesn’t shy away from that, as over 34% of its holdings are considered value stocks compared to 26% with the growth designation. Japan, a market that’s long traded at a discount relative to the U.S., accounts for 33.54% of IDLB’s geographic exposure. The fund’s value exposure could prove relevant over the near term.

“These changes in leadership result from behavioral as well as fundamental factors. After a full cycle of outperformance, relative valuations and earnings expectations become stretched and begin to reverse with the catalyst of a new cycle. And now, the start of a new cycle may once again signal a switch to international stocks in the years ahead,” adds Kleintop.

IDLB also offers investors an avenue for diversifying currency exposures in their portfolios, which could prove beneficial if the dollar declines.

“By holding an investment denominated in another currency, an investor will experience both the change in the asset price (in that currency) but also the change in the value of the currency, when measuring a portfolio in dollars,” notes Kleintop. “Since currency valuation can move as much as the stock price, it’s an important factor to consider. The U.S. dollar is the world’s most-used currency, but that doesn’t mean its value is a constant.”