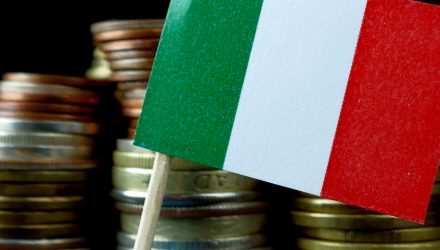 Italian stocks and the iShares MSCI Italy Capped ETF (NYSEArca: EWI) are mired in slumps that started earlier this year amid fears Italy could leave the Eurozone. While “Italexit” fears have subsided, the Eurozone’s third-largest economy still faces a host of challenges.

Italy’s markets were upended at the end of May on speculation of the potential rise of an anti-euro zone faction.

The sudden decline in Italian assets intensified on worries that the Eurozone’s third largest state could exit the bloc and may even trigger further breakdown in the euro currency union after the Five Star Movement and the League – two Euroskeptic parties – formed a coalition.

“Disagreements over fiscal policy are likely to reveal considerable fault lines between the ruling Lega and M5S parties, increasing the risk of government collapse well before the end of the current parliamentary term,” said Markit in a recent note. “Italy is poised to remain trapped in a damaging cycle where low growth produces populist governments and populist governments preclude long-term reforms conducive to growth.”

After slumping more than 13% over the past six months, EWI is lower by 5.2% year-to-date. The benchmark Italy ETF resides 8.4% below its 200-day moving average and more than 16% below its 52-week high.

Home to nearly $448 million in assets under management, EWI holds 26 stocks and tracks the MSCI Italy 25/50 Index. The Franklin FTSE Italy ETF (NYSEArca: FLIY) is a rival to EWI. FLIY is down about 5.4% year-to-date.