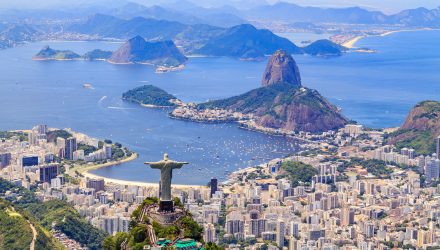 The iShares MSCI Brazil Capped ETF (NYSEArca: EWZ), the largest exchange traded fund tracking Brazilian equities, is up 17% this year. On its own, that is an impressive showing, but one made all the more so when considering the spate of political controversy again facing Latin America’s largest economy.

“On 24 January 2018, the Federal Regional Court of Appeal of the 4th Region (TRF-4) unanimously upheld the conviction of former president Luiz Inácio Lula da Silva for corruption and money laundering,” said Markit. “Additionally, the court increased his prison sentence from 9.5 years to 12 years. The judges did not request Lula’s immediate arrest, and he can still appeal, but the fact that the ruling was unanimous constitutes a serious setback for his efforts to stay free and able to run for president in October 2018. However, the Workers’ Party (Partido dos Trabalhadores: PT) remains adamant that he would be its presidential candidate.”

“Lula is comfortably leading in the opinion polls with 36%, nearly double the score registered by Jair Bolsonaro, the right-wing candidate, who consistently has come up second in most polls,” said Markit. “As stated by the electoral Clean Record Law (known as Ficha Limpa), any candidate tried and convicted of crime cannot run for public office.”