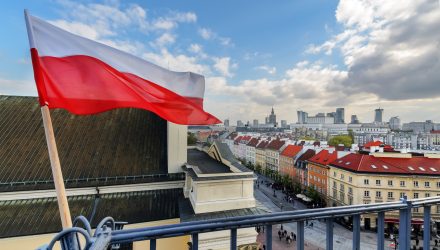 Poland country-specific exchange traded funds popped Wednesday, breaking above their short-term trend lines, as the country recovers from a corruption scandal and pushes through ongoing tensions between Russia and Ukraine.

Chrzanowski stepped down after the Gazeta Wyborcza newspaper reported he had sought a multi-million dollar bribe from billionaire banker Leszek Czarnecki. Czarnecki alleged Chrzanowski offered favorable treatment for his banks in return.

Concerns over a scandal that would drag down the banking system have since eased after the resignation.

Polish equities received further support from legislation that reversed legal changes concerning the Supreme Court, which led to a dispute with the European Commission.