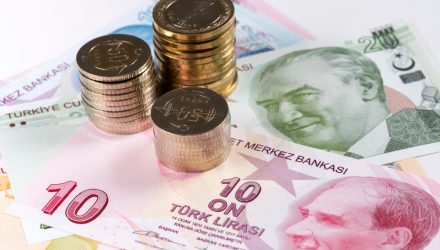 A Turkey country-specific exchange fund plunged on Friday after the Turkish stock market suffered its worst day since March, and the lira currency continued to depreciate on worsening fears that recent interest rate cuts would further exacerbate inflation problems.

Meanwhile, the lira retreated as much as 8% against the U.S. dollar, despite Turkey’s central bank’s attempts to stop the bleeding in the country’s currency.

The sudden crash came after Turkey’s central bank cut interest rates under the unorthodox urging of President Recep Tayyip Erdogan, who argued for lower rates as a way to expand the Turkish economy. Mainstream economists warned the government not to loosen its monetary policy and to instead raise interest rates to combat rising inflation, which surged over 21% last month.

“We are astonished to watch the central bank releasing its precious foreign exchange resources to the market today after it cut rates yesterday,” Erdal Bahcivan, chairman of the board of the Istanbul Chamber of Industry, said in a tweet.

Friday’s latest decision to intervene in the currency market was the fifth attempt by the central bank to strengthen the lira this month. Policy makers attributed the actions to “unhealthy price formations in exchange rates,” according to a statement in response to the intervention.

“The diminishing impact of intervention is really telling,” Paul McNamara, an emerging market fund manager at GAM, told the WSJ. “With this kind of intervention, the trouble is the market knows the level of reserves they have. It’s not like Russia or Brazil—countries that really have a lot of foreign currency they can throw at this.”

While Turkish equities have somewhat strengthened recently as citizens looked to investing in companies that would raise prices alongside inflation, the fears of runaway inflation weighed on Turkey’s market outlook.

“Generally, a little bit of inflation is good for equities,” Daniel Wood, a portfolio manager at William Blair Investment Management, told the WSJ. “Once you get concerned about hyperinflation, that’s bad for companies.”