You are at:Home»Featured»Plug Power Is Making Moves – So Are These Energy ETFs 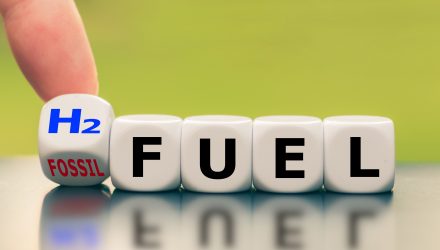 Plug Power Is Making Moves – So Are These Energy ETFs

While most investors are aware of the massive hype that Tesla has been receiving lately, another stock that has made a surprise move is that of fellow clean energy-related company Plug Power.

Plug Power is an American company engaged in the design and manufacturing of hydrogen fuel cell systems that replace conventional batteries in equipment and vehicles powered by electricity.

The hydrogen fueling specialist continues to make solid efforts towards its plans of reaching $1 billion in sales over the next couple years. And shares have reacted strongly, rocketing higher the last 14 months by nearly 350% to $4.40.

On Wednesday, without any news significant news catalyst such as quarterly earnings results that could give the stock a boost higher, shares of Plug Power rose more than 10%, on the heels of a 9.7% on Tuesday. In the last 6 months the stock has jumped 137%. In the last year, shares are up 212%.

The moves in the stock have been so impressive, in fact, that social media users on popular sites such as Reddit, which has become a haven for investing news and rumors, are placing it among the ranks of big speculative companies like Tesla and Virgin Galactic.

“I cashed on SPCE, got out a little early but had huge gains. And I’m in the haul for PLUG,” Reddit user kashflowz said, while Heydanu wrote “Sold of 50% SPCE for a big win. Bought a lot of PLUG.” User Letsdothisfish simply said “PLUG TO THE MOON.”

Fintech company SoFi said Wednesday that the PLUG was headed for its most-transacted day in history, driving forward from momentum on Tuesday.

Much of the company’s growth could be the result of  landing major deals with Walmart and Amazon in recent years. The company’s hydrogen fuel cell or HFC technology allows those retail giant’s forklifts to more easily power their commercial operations.

Recently there are even rumors that Plug Power could land a $50 million deal with home improvement chain Home Depot.

For investors looking to use ETFs to play Plug Power, the Invesco WilderHill Clean Energy ETF (PBW) and the SPDR S&P Kensho Smart Mobility ETF (HAIL) both have healthy allocations of the stock and are up themselves today by 5.44% and 2.17% respectively.