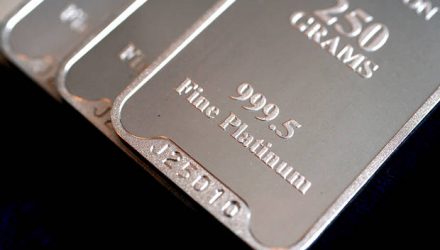 The platinum exchange traded fund is retreating after European countries crack down on pollutants.

“We’re witnessing the creeping death of diesel,” Stefan Bratzel, director of the Center of Automotive Management at the University of Applied Sciences, told Bloomberg News. The technology will still survive in some segments like trucks, but “if you’re a private car buyer, it’s very hard to pick diesel. The insecurity is growing.”

The ruling affects more than 10 million vehicle owners in Germany and could have ripple effects across Europe.

“This is a groundbreaking ruling, and one which we expect has set a strong precedent for similar action across Europe,” Arndt Ellinghorst, an auto-industry analyst with Evercore ISI, said in a note to clients. The ruling is “damaging to already-battered diesel sentiment.”

For instance, on the heels of Germany’s decision, Rome mayor Virginia Raggi announced “Rome has decided to ban the use of diesel cars from its historical center from 2024” at the Women4Climate conference in Mexico City, Electrek reports.