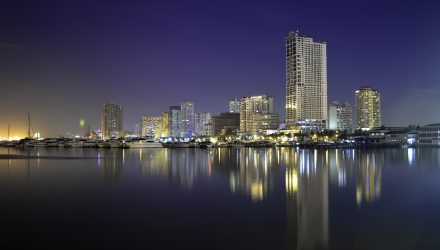 The leading Philippine ETF continues to strengthen despite concerns over President Rodrigo Duterte and his heavy-handed approach to governing.

The iShares MSCI Philippines ETF (NYSEArca: EPHE) is up 14.4% year-to-date. Meanwhile, the benchmark PSEI has increased 20% this year, making it among the world’s better-performing indices.

The markets have maintained their momentum despite the Philippine administration’s fight against both Islamic militants in the south and a war on drugs that has claimed thousands of lives, reports Ese Erheriene for the Wall Street Journal.

However, a weak Philippine peso has weighed on the market, with the local currency falling to its lowest level in 11 years. The weak peso has also dampened gains in EPHE, which does not hedge its currency risk. Some observers, though, argue that the weaker currency could bolster the country’s export industry.

Some were concerned that Duterte’s policies would derail the economy and drive away businesses, but fears have so far been proven to be unfounded.

“The election of Duterte, the shake-up to the political order and his various international spats led investors to shun Filipino assets amid fear that he would cause growth to slow,” Alex Holmes, an Asia economist at Capital Economics, told the WSJ. “But in reality, Duterte has not been the disaster that people feared.”