You are at:Home»ETF Strategist Channel»Perspective on Pullbacks: Plan, Don’t Panic

It’s one thing to write about the potential for uncertainty to return to the market…but it’s a lot different to actually experience it. Last week’s ~4% drop in the market – culminating in a 665-point drop in the Dow Jones Industrial Average on Friday – marked an abrupt end to a historic period of abnormally low volatility. The weakness in this morning’s market open suggests the downtrend may continue today. For those fearful that this recent tantrum is signaling the end of this bull market, we present three important takeaways:

Our Perspective: What occurred last week is completely normal within the context of a strong bull market

It should in fact be expected… and, perhaps, even welcomed by sidelined investors hoping for a lower entry point. Technical analysis suggests the trend is still intact so far.

Our Point of View: The fundamental backdrop of the stock market appears to be healthy

This pullback may get worse before it gets better, but we believe that it’s unlikely that today marks the end of the global bull market. We remain bullish on equities, with a particular preference for stocks outside the U.S.

Our Plan: Risk Management is a Key Part of our Process

Regardless of our perspective and point of view, RiverFront has a disciplined risk management process that stands ready to take action if called for. As markets have been rising, we have been systematically raising our technical stops in anticipation for volatility to reemerge. If our levels are triggered, we will take action.

The media seems to love quoting specific point drops in widely-followed indexes. But while a 665-point drop in the Dow grabs headlines, recognize that this represents only a 2.5% down move on Friday; in the “Black Monday’ crash of 1987, 508 points on the Dow represented a drop of 23%!  Until last week, the market had not had a weekly pullback of greater than ~3% for 400+ days, an event that hasn’t happened in 90 years. According to data compiled by First Trust, since 1980 the S&P 500 has averaged a roughly -14% intra-year decline each calendar year – despite posting yearly positive returns in over 75% of those years. 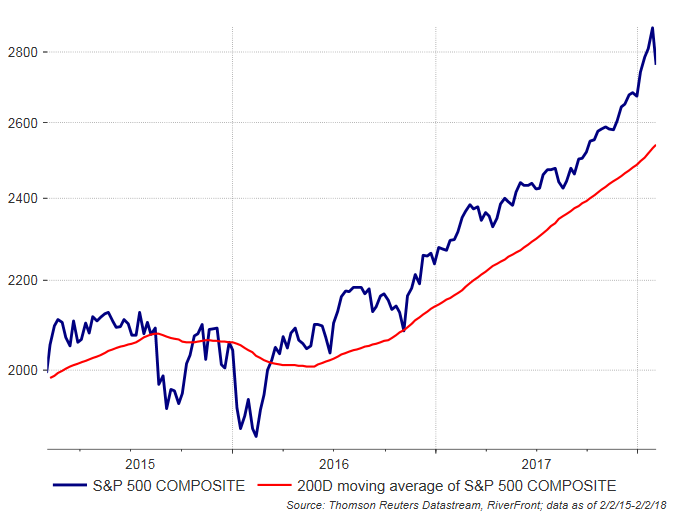 Past Performance is no guarantee of future performance. You cannot invest directly in an index.

It’s easy to forget that this January was actually the best start to a year for the S&P 500 since 1997, and comes on the heels of very strong global market returns in 2017.  The chart to the right puts the recent week’s move into context: another 2-3% drop would simply take markets back to their levels at the beginning of the year. Markets in all major regions remain in a positive trend, as measured by their rising 200-day moving averages (red line in chart to the right).

Our 2018 Outlook highlighted our view that “rising rates and increased volatility will present challenges that financial markets haven’t faced in many years”, preparing investors to expect seeing ‘routine’ 5-15% pullbacks in the context of a postively trending market. Thus, we tend to view these as pullbacks as buying opportunities in an overall positive trend for stocks.

The current bull market is one of the longest on record, which makes some nervous. However,  the economic expansion that has fueled this bull run is also one of the slowest growing, lowest-trajectory economic recoveries on record; and thus may continue to grind on longer before the economy is anywhere near ‘overheated’ – a theme we explored in more detail in our 2018 Outlook.

Bear markets tend to be catalyzed by some combination of excessive valuation, economic recession, and/or restrictive monetary conditions. On each front, we continue to view the market backdrop today as not indicative of a major market top.

Rising bond yields shouldn’t be viewed as negative for stock valuations until much higher absolute yield levels, in our opinion. The current narrative is that the stock market is increasingly scared of equity valuations in light of rising US interest rates… a concern exacerbated by Friday’s strong jobs report. For reference, the S&P 500 is currently trading at around 18.5x 12-month forward price-to-earnings (P/E).  According to RiverFront’s historical analysis, S&P 500 P/E multiples between 15 and 20 are consistent with 10-year treasury yields between 2% and 5%, with the market generally rewarding investors with higher multiples until yields reach well north of 4%. With the 10-year up 50 basis points (bps = 1/100th of 1%) this year but currently at only 2.85%, we think it’s still too early to start worrying about stock valuations, especially given positive economic trends.

Central bank monetary policy remains generally accommodative, in our opinion. Much has been made of the Fed’s ongoing interest rate hike cycle, now increasingly viewed as four hikes this year. But given the weak dollar and low starting yields, financial conditions in the US remain exceptionally easy, in our opinion. Importantly, foreign monetary policy appears set to remain even more accommodative, given the lack of inflation experienced in both Europe and Japan.

Recession unlikely with expanding economic output and earnings, in our view. A rule of thumb is that major stock market tops tend to occur as the market starts to sense an increased probability of recession. With most global measures of economic momentum continuing to display strength, it is difficult for us to envision a recession in the next 6-12 month. For example, over 90% of all countries’ economies surveyed in the Markit Purchasing Managers Index (PMI) surveys are in expansionary territory. This economic strength is also bearing itself out in corporate earnings – each major region is positioned to have significant earnings growth in 2018, according to I/B/E/S consensus estimates. The U.S. is demonstrating one of the strongest earnings momentum periods on record. Combined estimates for 2018 profits among companies in the index have gone from $145.90 a share on Dec. 15th to $156.20 on Friday, a rate of increase that is four times faster than any stretch since at least 2012 (source: Bloomberg).

We believe our counterpoints to the ‘scary headlines’ are logical, reasonable, and defensible. But success in investing, in our opinion, has as much to do with humility and discipline as prognostication.  Much as the military formulates a game plan long before actual battle, so should a disciplined stock investor decide ahead of time what conditions are important to monitor, and then be willing to unequivocally act if those conditions change. RiverFront formulates premediated risk plans for this very reason.

After 15 straight months of higher markets, market sentiment started to reach extreme levels in readings such as RSI (relative strength index – a technical indicator suggesting strength of trend). However, high market sentiment isn’t in and of itself a bearish sign that a market top is imminent, in our opinion. Instead, our research suggests that historical market odds from high RSI readings are as good if not better than average, depending on the forecast period and the slope of moving averages. RiverFront’s tactical models have been continuously signaling that the odds were greater for having positive returns than negative returns over the last couple of months.

However, we also implemented a series of rising stop-loss levels as potential risk reduction triggers. Rising stops to us are a logical way to deal with frothy sentiment, because the stops readjust tighter as markets go higher; theoretically, they help prevent you from exiting too early, while still creating an unemotional process for risk reduction. Should those stop-losses get triggered, we will not hesitate to act…so stay tuned.