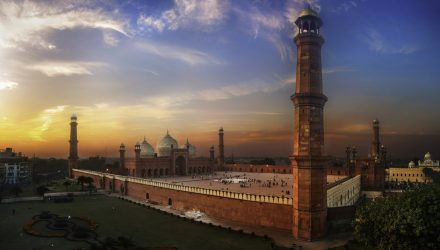 Pakistan markets and country-specific ETF retreated Tuesday after the government said it is requesting a bailout from the International Monetary Fund to rein in a ballooning trade deficit and falling foreign exchange reserves.

The new government under Prime Minister Imran Khan promised millions of new jobs and the creation of an “Islamic welfare state,” but it now needs to raise as much as $12 billion to head off what could be an economic meltdown from its widening trade deficit and diminishing forex reserves, the Wall Street Journal reports.

The bailout will likely force Islamabad to rein in spending and increase taxes. Pakistani officials also warned that it could cause cutbacks in the global infrastructure building program with China, along with IMF scrutiny of Pakistan’s financial obligations to China.

The U.S. has accused Beijing of “debt-trap diplomacy” and warned that any IMF bailout for Pakistan should not go toward paying off China.

Nevertheless, Chaudhry Fawad Hussain, Pakistan’s information minister, assured markets that Pakistan would be able to pass this hurdle. The country has received several bailouts from the IMF and paid them back before.