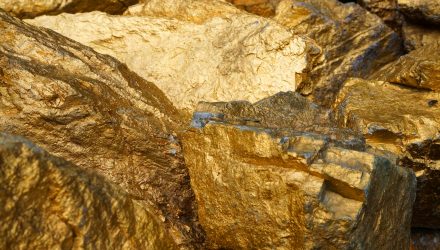 One Analyst Believes Gold, Commodities May Soon Rise From the Dead

While many investors are focused largely on stocks lately Michael A. Gayed, CFA and Portfolio Manager, Chief Investment Strategist, and Award-Winning Author at Pension Partners, LLC believes that gold and commodities in general could see a rally in the future.

Gayed describes how most people think that when an index move, it means all markets are moving, which is not always the case.

“I think most people when they think about the market they think purely about the S&P 500 and the Dow because that’s what they’re constantly seeing on TV, that’s what they’re seeing in articles, when in reality, you know, not all markets are the same and not all markets have made new highs. Just as some sort of background info: small caps are not at new highs, emerging markets are certainly not at new highs, Europe has been improving, but it’s definitely nothing truly remarkable, at least relative to U.S. markets. So you had markets at new highs but I always like to tell people, ‘which markets are we talking about?'”

Gayed mentions that the case for gold and commodities rising has its roots partly in the Federal Reserve finally reaching the realization that they must do what is necessary to overcome inflationary problems in the economy, and “inflate away all of this debt that is pervasive throughout the globe and really on the government balance sheet side.”

One way to do ease this pressure is by inflating commodity prices, Gayed explained.

“Generally when you see commodity prices rising, that’s a form of cost push inflation. In other words, as you see raw material prices increase, some of that gets passed down to the end consumer. And given that commodities have been in this prolonged, bear market for some time, you know its been left for dead, and generally when you have an asset class that’s left for dead, it has to make a comeback so similar to Lazarus,” he explained.

Observing the bear market and subsequent consolidation period that gold suffered before starting to come back some, Gayed explains that markets that have been at lows for some time, like gold, tend to rally back fiercely, as investors begin to dig in and buy bargains.

This could be in play currently, as gold prices continue their ascension, hitting a five-week high, and cresting above the $1600 barrier on Tuesday, as stocks sold off dramatically in the post-holiday trading session.

The lustrous metal, which is a traditional safe-haven for investors, is benefiting from the current global uncertainty involving the coronavirus outbreak, which is significantly damaging global economic growth. April gold was recently up nearly $20 an ounce, reaching a high above $1,605.

Finally, for the investors who are looking to diversify their portfolios, Gayed points out the shiny metal’s benefits as a non-correlated asset, in his opinion.

“Gold really is a non-correlated asset. It doesn’t really move to stocks. It doesn’t really move to bonds. It’s kind of its own anumal. And from an asset allocation perspective, if you’re concerned about what’s gonna happen to your investments going forward, you want more diversification, which means you want more non-correlated assets. And gold absolutely fits the bill in that case,” Gayed explained.