You are at:Home»Featured»Oil, Gas, and Inverse Crude ETFs Outperform Amid Crude Market Decline 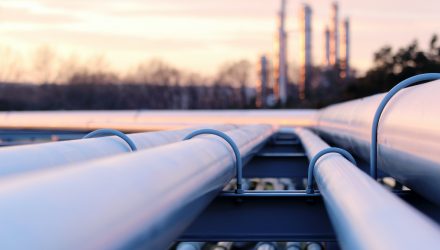 Crude oil prices augmented their 5-percent tumble from Wednesday, dropping an additional 5% on Thursday morning, with WTI Crude slipping below $35 a barrel, as key economies in Europe reinstated lockdowns to curb the a resurgence of Covid-19 infections. But while the news of the spike in infections has been rough on stocks and commodities, oil and gas ETFs and inverse crude ETFs are taking advantage of the moves.

While oil ETFs like The United States Oil Fund (USO) were under pressure and declined 2.70% after falling Wednesday, inverse ETF traders were elated by the crude market’s moves. The ProShares UltraShort Bloomberg Crude Oil (SCO) surged over 5%.

WTI Crude plunged by more than 5.3% to $34.92 on Thursday, while global benchmark Brent Crude tanked another 4.98% to $36.89. This was the lowest level West Texas Intermediate reached since June, while the international crude hit its lowest price since May this year.

The sell-off in crude hastened this week following the American Petroleum Institute (API) report on Tuesday that revealed a larger than anticipated build in crude oil inventories of 4.577 million barrels for the week ending October 23. The surfeit of oil was confirmed on Wednesday by the EIA, which sent oil plummeting 5 percent, as investors and traders feared a drop in demand with coronavirus cases exploding.

“Crude oil domestic production number is up a crazy amount – why would producers do that? That’s not good, as it implies we will have a lot of crude oil for a long time coming out of the ground,” said Robert Yawger, Director of Energy Futures at Mizuho in New York.

But while crude oil has been suffering from fears of coronavirus shutdowns, oil and gas ETFs have been gaining, as EQT Corp. agreed to buy Chevron Corp.’s Appalachian shale assets for $735 million, as the biggest producer of U.S. natural gas takes advantage of an industry slump to expand. The transaction is projected to be completed by the end of the year, according to a statement from EQT on Tuesday.

Chevron has been trying to offset its Appalachian gas holdings since late last year, when it recorded an $11 billion write-down for that asset and other, amid a burgeoning domestic gas glut and falling prices for the furnace and power-plant fuel.

The acquisition is indicative of recent deals where shale drillers are looking to augment their holding to cope with a plunge in commodity prices that has left much of the industry unprofitable.

“This acquisition is a natural bolt-on extension of EQT’s dominant position in the core of the southwest Marcellus and supplements our already impressive asset base,” EQT Chief Executive Officer Toby Rice said in a statement.

While the drop in oil can be disconcerting for some, for savvy ETF investors looking for alternatives to trade, the ProShares Ultra Oil & Gas ETF (DIG) and the iShares MSCI Global Energy Producers ETF (FILL) are two promising funds to consider.