You are at:Home»Alternative ETFs»Ohio Latest State to Adopt Blockchain Legislation 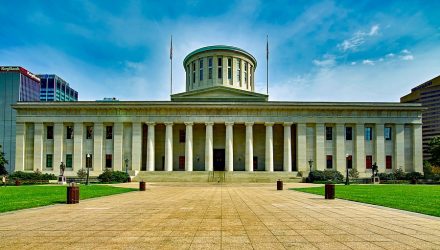 The state of Ohio is now the latest state to recognize the storage and transaction of data utilized with  blockchain technology as Governor John Kasich signed the bill, SB 300, into legislation.

SB 300 was introduced in May with the prime focus of treating data and smart contracts stored through blockchain technology as electronic records. Blockchain technology, which forms the basis of cryptocurrencies like Bitcoin, has been unintentionally associated with negative news regarding digital currency exchange hacks and other security issues.

However, blockchain itself has managed to separate itself from cryptocurrencies as an emerging technology for various sectors, such as finance, health care and other industries. Companies like health insurance provider Anthem and the big four accounting firms (Deloitte, EY, KPMG and PwC) have experimented with using blockchain technology.

“In Ohio, blockchain innovators can thrive in their efforts to develop new products and applications for the financial industry and beyond,” said Valentina Isakina, JobsOhio financial services managing director. “Many companies looking to expand their blockchain and R&D operations are rapidly growing job creators, and Ohio is now even more attractive to these businesses.”