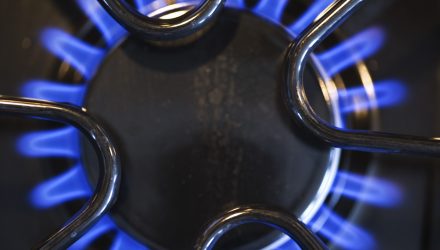 Natural Gas ETFs Could Sizzle in the Summer

Natural gas prices and natural gas ETFs could heat up this summer as low supply coupled with rising electricity demand to beat the higher temperatures ahead could stoke this energy category.

The United States Natural Gas Fund (NYSEArca: UNG) gained 1.3% Wednesday and held above its long-term trend at the 200-day simple moving average as Nymex natural gas futures added 1.6% to $2.99 per million British thermal units. UNG is up 8.2% over the past three months and 2.2% higher year-to-date.

Natural gas stockpiles are scrapping the bottom of the barrel after an extended winter this year raised heating demand for homes, reports Stephanie Yang for the Wall Street Journal. Furthermore, rising U.S. exports of natgas have also siphoned off excess inventories, and analysts argued that the cheap prices have made it more convenient to power electricity generation, as opposed to the more expensive coal.

Looking ahead, natural gas consumption is expected to raise as it generally does in the summer months in response to increased cooling demand to stave off the heat.

Gas Inventories at Lowest Since 2014

However, we are beginning the summer season in June with natural gas inventories at the lowest level since 2014 for the same time of the year, and the second lowest in a decade.

With weather forecasts in July projecting hotter-than-average temperatures across the U.S., the increased consumer demand could support higher natural gas prices. According to Bespoke Weather Services, the amount of energy required to cool buildings in June is on track for its second highest level since 1981.