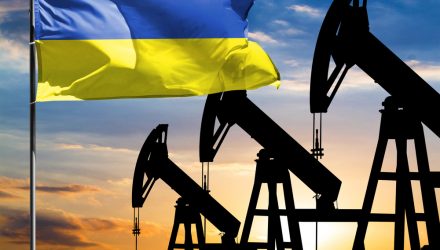 With the Russia-Ukraine conflict ongoing, oil prices are rising, and while some forecasts for the commodity are drifting as high as $130 per barrel in Brent terms, some market observers view that as unlikely.

Still, there’s no denying that energy equities and the related exchange traded funds are on torrid paces due to the geopolitical tensions in Eastern Europe. For example, the Invesco DWA Energy Momentum ETF (PXI) jumped 4.77% on Monday, extending its one-week gain to 7.22%.

Not only that, but PXI, which tracks the Dorsey Wright® Energy Technical Leaders Index, also hit a 52-week high on Monday, pushing its year-to-date gain to 24.2%. That’s confirmation that PXI’s momentum-driven methodology is capitalizing on some obvious momentum in the energy patch as traders fret about the possibility of oil shortages amid punitive sanctions by the West against Russia. Indeed, recent price action confirms that PXI is benefiting from the crisis in Ukraine.

“Russia produced about 11% of the world’s oil supply and 37% of Europe’s natural gas supply last year, says Ashley Fernandes, Fidelity portfolio manager. And the conflict is coming at a time when U.S. consumers have already seen recent energy price jumps,” according to Fidelity research.

Just over 12% of PXI’s 45 holdings are classified as large-cap stocks, which is an important point not only because that puts the size factor on the fund’s side, but also because most mid- and small-cap energy stocks have limited international exposure.

In other words, PXI components benefit from rising oil prices regardless of where they’re drilling. Another perk for the fund’s member firms is that while politicians are pushing the White House to allow more domestic drilling, it will be some time before that new supply comes online, if it arrives at all.

“While upward pressure on prices may hurt consumers, certain segments of the energy sector may see a positive impact—most notably large, integrated oil companies that don’t own significant assets in Russia, and companies that benefit from rising European and international gas prices,” notes Fidelity, citing Fernandes.

As noted above, PXI components belong in that conversation, too, owing to their heavy concentration on domestic oil fields. Plus, in this era of restrained spending in the oil patch, PXI member firms are improving their balance sheets and bolstering free cash flow, which are quality traits that could buffer the ETF against geopolitical volatility.