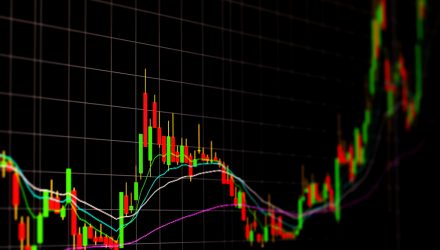 Looking at the Nasdaq ETFs as a Contrarian Play

Technology stocks and the growth style have been hammered, with the Nasdaq Composite Index close to official correction territory. However, this recent selling could be a good opportunity for investors to take another look at the Nasdaq and related exchange traded funds.

The Invesco QQQ Trust (QQQ), which follows the tech-heavy Nasdaq-100 benchmark, has declined 5.1% so far this year.

However, the ProShares UltraPro QQQ (TQQQ), which takes on 3X or 300% of the daily performance of the Nasdaq-100, has been among the most popular ETF plays over the past week, attracting $1.1 billion in net inflows, according to ETF Database.

The Nasdaq Composite is down about 8% from its November high, or just short of a correction, after more than doubling in less than two years. According to Ned Davis Research, over 36% of the benchmark’s components are down at least 50% from their 52-week highs, Bloomberg reports. To put this in perspective, when the Nasdaq is within 10% of its peak, an average of about 12.5% of its underlying holdings typically decline that much.

The divergence between the recent selling and historical norms reflect the heavy influence of technology stocks on the benchmark. Fast-growing tech names rely on financing, and valuations depend heavily on future profits, which makes them more sensitive to rising rates.

“Market breadth for Nasdaq stocks is pretty pathetic,” Ed Clissold, chief U.S. strategist at Ned Davis, told Bloomberg. “When you’re in the middle of something like this, it’s tricky to decipher whether it’s a normal rolling correction or a bull market peak. But the longer this goes on, the harder it’s going to be to ignore.”

“We’ll have to see if earnings season comes to the rescue once again,” Clissold said, adding that technical indicators like market breadth have improved over the past few quarters on improving corporate-profit outlooks. “Still, earnings revisions over the past several weeks weren’t as strong as other pre-announcement periods last year, which leads us to believe that we may not get those fantastic beat rates.”