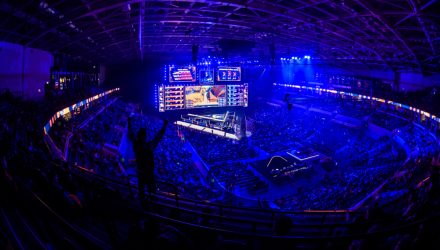 The Global X Video Games & Esports ETF (NASDAQ: HERO) is up 69.49% year-to-date, easily making it one of 2020’s most impressive thematic funds from the perspective of pure performance, but there could be more upside available with this ETF.

HERO, which is nearly a year old, “seeks to invest in companies that develop or publish video games, facilitate the streaming and distribution of video gaming or esports content, own and operate within competitive esports leagues, or produce hardware used in video games and esports, including augmented and virtual reality,” according to Global X.

With HERO and related ETFs, video publishing, hardware and software get most of the attention, but investors shouldn’t lose sight of the massive esports opportunity.

“Sports sponsorship deals will generate at least $636.9 million in 2020. This would mark a Compound Annual Growth Rate (CAGR) of 16.6% and make commercial partnerships the top revenue source for competitive gaming globally,” according to SafeBettingsites.com.

Take-Two Interactive is one of the beneficiaries of that move toward increasing video game engagement. Chairman and CEO of Take-Two, Strauss Zelnik, noticed that there has been an uptick in demand for video game stocks as consumers have continued to pursue playing video games online at home during the quarantine.

As for a long-term view of HERO, consider the following spending trajectory. Hint: it’s positive for the Global X ETF.

“eSports was a relatively niche market back in 2014, worth about only $194 million. In only five years, it has grown at least five-fold in terms of revenue and is expected to reach $1.1 billion in 2020,” according to SafeBettingSites.