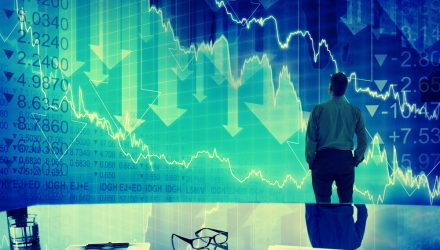 One of the most prominent stories involving international equities is the slump of Chinese internet stocks (among others in that country) prompted by heavy-handed regulatory policies by the Chinese Communist Party (CCP).

However, some investors are buying the dip and doing so in devoted fashion. That’s lending support to a recent rally in Chinese internet names, one that helped PGJ surge 12.45% for the week ending Aug. 26. There’s been help in the form of strong earnings from JD.com (NASDAQ:JD) and Pinduodo (PDD).

Those “companies reported healthy sales increases in the second quarter and highlighted their contributions to Chinese society. Their performance took some of the focus away from Beijing’s widening regulatory crackdown, which has turned many investors off the once-hot internet sector,” reports Xie Yu for the Wall Street Journal.

JD.com is the largest holding in PGJ at 10.49% as of Aug. 25, while Pinduodo checks in at nearly 8%, according to Invesco data.

Some major PGJ holdings are also going on a charm offensive of sorts. Perhaps it’s to get Beijing off their backs, allay skittish investors’ concerns, or both. Whatever the motivation, it’s working, as highlighted by PGJ’s torrid performance over the last several days.

Recently Tencent Holdings “said it would invest the equivalent of $7.7 billion to promote ‘common prosperity’ in China. The videogaming and social-media giant previously had earmarked a similar sum to fund research in areas such as science and carbon neutrality that are strategically important to Beijing,” according to the Journal.

The social prosperity issue is relevant to investors because Chinese internet companies have created vast amounts of wealth for a small number, laying to bear vast income equality in the world’s second-largest economy while stoking speculation the CCP could pursue income redistribution.

For its part, JD.com, one of the largest online retailers in China, says it relishes the opportunity to be a better corporate steward. As the Journal notes, Chinese regulators are taking aim at a practice whereby the likes of JD.com and Alibaba (NYSE:BABA) force merchants to exclusively sell on one platform — a policy viewed as anti-competitive.

Plenty of Chinese internet firms are saying they are up for more competition, but they’ll have to pay more than lip service to that in order to get Beijing off their backs. That’s important for PGJ investors because the ETF allocates over 78% of its weight to consumer discretionary and communication services stocks.