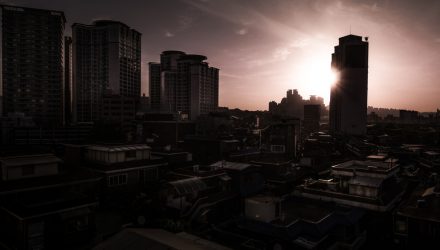 Since last weekend, California is implementing rolling blackouts to conserve power as temperatures surge across the state. Part of the reason this is necessary is because the state currently lacks the battery capacity to deploy renewable energy on par with its ambitious agenda, meaning that when heatwaves arrive and demand spikes, there’s an unfortunate gap between demand and supply.

What’s happening in California right now is just one example, but it underscores a potentially compelling thesis with battery storage and technology ETFs, such as the First Trust/Clean Edge Smart Grid ETF (NasdaqGM: GRID).

“As the threat of blackouts continues to plague California, officials are pointing to battery storage as a key to preventing future power shortfalls. But the Golden State is going to need a lot more batteries to weather the next climate-driven crisis—let alone to achieve its goal of a carbon-free grid,” reports Bloomberg. “It won’t be cheap, potentially costing close to $19 billion. But more critically, there aren’t enough of these massive batteries to go around right now.”

As billions go into updating and fixing the nation’s aging infrastructure, investors now have the opportunity to capitalize on the ambitious “smart grid” revolution with the use of GRID. With increased adoption of renewable energy, there’s long-term opportunity with GRID.

“California’s latest energy crisis has several causes. For one, 9 gigawatts of gas generation—enough to power 6.8 million homes—was retired in recent years. Over that same period, the state’s grid integrated more solar power, which without sufficient battery storage can be less reliable than the fossil fuels that drive global warming,” according to Bloomberg.

Again, California is just one example, but the state points to significant opportunity with GRID. The Golden State probably needs as much as 12 gigawatts of battery storage capacity for renewable energy, but it only has 500 megawatts today.