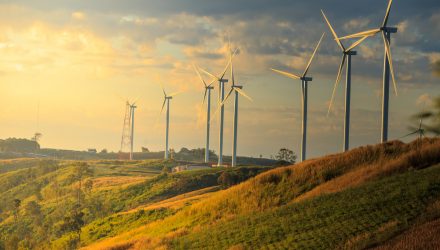 Play Wind Energy Ramp Up with this ETF

Along with solar, the wind is one of the most deployed, talked about, and investable forms of renewable energy. There are some exchange traded funds dedicated to the wind energy cause.

The First Trust Global Wind Energy ETF (FAN) is the king of the group. FAN, which tracks the ISE Clean Edge Global Wind Energy Index, is struggling alongside other renewable energy ETFs. However, the wind ETF is also participating in a recent rally induced by high oil prices and Russia’s war against Ukraine. FAN has been higher by 6.46% over the past month.

For patient investors, FAN’s recent momentum could be the start of something more significant because data indicates that while wind installations are at impressive levels, those levels need to rise, implying spending is likely to follow suit.

“After a year in which net-zero commitments gathered global momentum, coupled with renewed urgency for achieving energy security, the market outlook for the global wind industry looks even more positive. 557 GW of new capacity is expected to be added in the next five years under current policies. That is more than 110 GW of new installations each year until 2026,” according to the Global Wind Energy Council (GWEC).

While that sounds impressive, the fact remains that if various net-zero objectives are to be met by previously stated timelines, most of which center around the year 2050, wind installations need to be escalated in significant fashion. That could be a potential catalyst for FAN.

“However, this growth needs to quadruple by the end of the decade if the world is to stay on course for a 1.5C pathway and net-zero by 2050,” adds the GWEC.

FAN, which turns 14 years old in June, is home to nearly $330 million in assets under management and 53 stocks. That’s an expansive roster in the clean energy ETF space, particularly for a fund focusing on a singular concept as FAN does.

Importantly, FAN is also geographically diverse. The fund features exposure to 10 countries – a meaningful trait because the wind energy industry is international in nature.