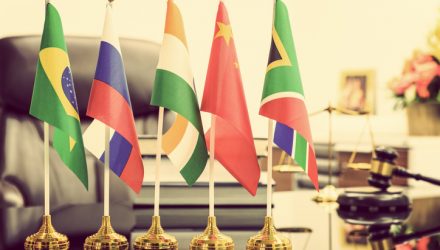 EMB, the largest emerging markets bond fund, is higher by nearly 9% this year. EMB tracks the J.P. Morgan EMBI Global Core Index, a market-cap-weighted index. Potential investors should note that since it is a cap-weighted index, countries with greater debt will have a larger position in the portfolio.

“One beneficiary of a perceived easing in the U.S.-China trade conflict: EM debt, which has rallied recently and outperformed developed market peers,” said BlackRock in a recent note. “We see factors further supporting EM debt from here: a likely Federal Reserve rate cut this week and the potential for a stable U.S. dollar; an EM growth rebound; and a temporary U.S.-China trade truce. We favor selected EM debt for its income potential.”

“So far this year, both hard currency EM bonds – those mainly denominated in U.S. dollars – and their counterparts denominated in local EM currencies (so-called local currency bonds) have delivered strong returns,” according to BlackRock. “Hard currency has outperformed mainly due to U.S. Treasuries’ strong performance.”

While a Fed rate cut helps, some emerging markets central banks are expected to lower rates, too. Brazil, Chile, Mexico, India, and Thailand are among the developing economies that have recently trimmed borrowing costs.

Speaking of the Fed, which lowered interest rates for a third time this year earlier this week, the Fed remains integral to EMB’s fortunes.

“The Fed’s dovish shift has helped local EM currencies recover versus the U.S. dollar, and this may persist in the near term,” notes BlackRock. “Its recent injections of liquidity into money markets have also helped weaken the dollar and hold down rates, in our view.”