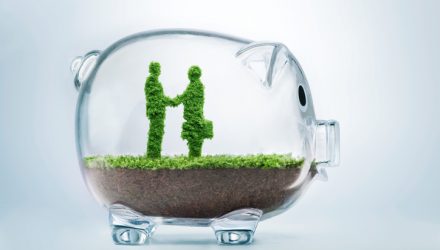 The Original Green Bond ETF Gets a Lower Fee

The VanEck Vectors Green Bond ETF (NYSEArca: GRNB), the first fixed income ETF offering exposure to green bonds, now has a lower annual fee. In a statement out Tuesday, VanEck confirmed that GRNB’s new expense ratio is 0.20%, down from 0.30%.

That means a $10,000 stake in the green bond fund will now cost investors $20 per year. The issuer also announced an index change for GRNB, which debuted in March 2017.

“The fund now seeks to track, before fees and expenses, the performance of the S&P Green Bond U.S. Dollar Select Index, which is comprised of U.S. dollar-denominated green bonds that are issued to finance projects expected to have a positive environmental impact,” according to Seeking Alpha.

Green Bonds Can Make A Difference

Green bonds are debt securities issued to finance projects that promote climate change mitigation, adaptation or other environmental sustainability purposes. The new breed of green bonds gained momentum in the global market ever since the European Investment Bank issued the first green bond in 2007.

Nearly 39% of GRNB’s holdings are issued by governments and another 30.9% are issued by financial institutions. GRNB is a global bond fund with heavy exposure to Europe. Nearly 64% of its 151 holdings are denominated in euros while just over a quarter are priced in U.S. dollars.

“The fund’s new index is comprised of U.S. dollar-denominated green bonds that are issued to finance projects expected to have a positive environmental impact,” according to VanEck. “To be eligible for inclusion, issuers must disclose the bond’s use of proceeds, and the bond must be designated as green by the Climate Bonds Initiative(CBI)based on its assessment of the projects being financed. The CBI is an investor-focused non-profit organization that is working to promote large-scale investment in the low carbon economy.”

Green bonds typically carry high credit quality as highlighted by the fact that about 61% of GRNB’s holdings are rated AAA, AA or A. That’s a significantly higher percentage of A ratings than are found in traditional corporate bond funds.