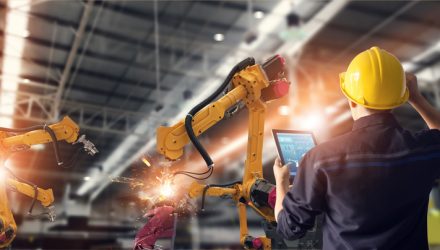 NFRA seeks investment results that correspond generally to the price and yield performance, before fees and expenses, of the STOXX Global Broad Infrastructure Index.

As Lydon explains, with investors wrapping up 2019 after 10 years of a bull market, they aren’t taking growth for granted anymore. This is especially the case overseas.

“The overseas markets haven’t performed as well as domestic markets,” Lydon states. “But, infrastructure is something that will continue. We only contribute, in the U.S., 2.4% of our GDP to infrastructure. While European countries do on average more than 5% GDP.”

Lydon points out China as an example, which does 8% of its GDP to infrastructure, which is necessary to keep up with global growth. Global infrastructure buildout is estimated to be at $40 trillion by 2030. A great strategy, currently, would be to invest in areas known to have money. That works for infrastructure, as it includes areas like transportation and energy.

Additionally, data communication is a big part of that as well. As Lydon notes, cellphones and related technology are going to be critical to developed markets, as well as emerging markets that need to build up their own infrastructure to meet the global demand in growth.

When asked about NFRA being a true diversifier, no matter what an investor has, Lydon explains how fundamental reasons surely hold true, but whether its investors or advisors and institutions, they are paying attention.

“One of the things that we do at ETF Trends and ETF Database is listen to what investors are searching for. We give them more of what they’re searching for. And in the last year, year-over-year growth, specifically to this ETF as far as search, is up over 1000%,” Lydon said. “This correlates with the amount of assets that have gone into this portfolio.”

So, the fundamental story is there for NFRA. It’s got the right stocks in it. Plus, the story is not going to stop anytime soon. The countries won’t pull back, and not allocate money that’s already been pre-allocated for infrastructure.

Lydon also explains how, with the knowledge that investors need to do a better job overseas, that rather than buying a diversified index or a diversified portfolio, there will be more selectiveness as far as where there is overseas allocation.

With NFRA, it likely has a better chance of having sustainable growth, even if there’s a slowdown or a global recession in the next 5 or 10 years.

“These are areas of the marketplace that are going to continue to see growth as more money is being thrown at it. But other areas, for example, banks, may not have as much  money going into them because maybe technology, during a recessionary time, might not get as much money allocated to them.”

As far as headline risks such as Brexit or trade wars, Lydon notes how trends will always happen and any stock can go down, which is why he’s big fan of following a 200-day moving average. With all of that in mind, NFRA has the fundamentals and a proven track record.