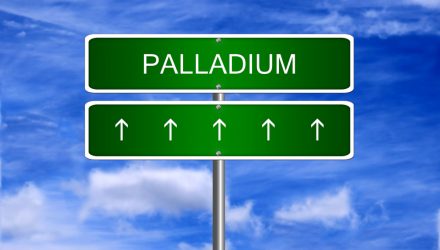 Can Palladium Stage a Comeback After Market Rout?

Palladium has fallen 45% after hitting highs in February thanks to the coronavirus contagion affecting the capital markets, which is challenging precious metals’ status as an alternative safe haven when things go awry. In early Friday trading, however, palladium rose 1.87% or $30.00–is it trying to stage a comeback?

A pop-in price certainly comes after some recent heavy selling.

“Liquidity was simply not there to cope with the amount of selling pressure,” said Saxo Bank analyst Ole Hansen. “That was probably the technical reason (for the price falls). The fundamental reason is related to the economic outlook, which is obviously looking pretty grim.”

In 2019, palladium was the toast of the town, surpassing gold in price and looking like it could cross the $3,000 per ounce price level before the coronavirus outbreak put a roadblock in front of that rally. Now, the precious metal faces other challenges that could tamp down demand and thus, prices.

Namely, an auto manufacturing slowdown in China could result in palladium demand dropping by about 200,000 oz, according to an S&P Global Platts report.

“We’ve tried to do some analysis around to calculate what slower auto sales in China mean for palladium demand,” Standard Chartered’s global research precious metals analyst Suki Cooper told S&P Global Platts in an interview. “If we use the IHS forecast, that 1.7 million units could be lost if plants were closed until mid-March, we estimate the loss in palladium demand could be around 200,000 oz.”

Cooper only sees weaker demand ahead even as the effects of the coronavirus are waning in China. The China Association of Automobile Manufacturers (CAAM) noted that car sales in February fell 82, but also stated that as of March 11, about 40% of the Chinese auto industry restarted production.

Investors sensing a comeback for palladium can look at the Aberdeen Standard Phys PalladiumShrs ETF (NYSEArca: PALL). PALL seeks to reflect the performance of the price of physical palladium, less the expenses of the Trust’s operations.

The fund is designed for investors who want a cost-effective and convenient way to invest in palladium with minimal credit risk. Based on Morningstar’s performance numbers, PALL is down 15% YTD after flying high in 2019 with a 53.94% gain.