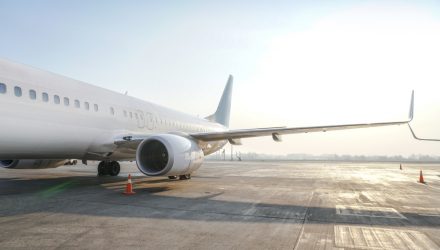 The travel industry and airline stocks have been hit hard in the wake of the coronavirus outbreak. Still, selling may be overdone, and an airline sector-related exchange traded fund may offer a cheap entry point for bargain hunters seeking a long-term opportunity.

The U.S. Global Jets ETF (JETS) has declined 35.9% over the past month and was down another 15.0% on Thursday. The ETF has experienced massive trading volumes in the past few weeks, touching a record of 2.37 million shares on March 6. The activity remains elevated with another 1.5 million shares exchanging hands on Thursday.

Meanwhile, the U.S. Global Jets ETF also saw inflows surge in the past two weeks, with net assets more than tripling to over $115 million.

For technical chart watchers, this current selling may be overdone and offers a relatively cheap entry point for more long-term investors. Specifically, looking at the relative strength index, a measure in the magnitude of recent price changes to evaluate overbought or oversold conditions, JETS was trading below its 14-day RSI for the airlines index, going back to 2001.

“It shows that airline stocks right now are the most oversold since September 2001,” Frank Holmes, CEO and Chief Investment Officer, U.S. Global Investors, said in a note.

“When the RSI falls below 30, it’s been a good buy signal, and anything below 20 has been a screaming buy,” Holmes said.

This long-term buying opportunity may have also been picked up by other value investors, notably investment guru Warren Buffett. Berkshire Hathaway acquired some 976,000 Delta shares in February for roughly $45.3 million, raising its total holdings to 17.9 million shares. Warren Buffett now owns approximately 11% of Delta. Buffett has quickly become one of the airline sector’s greatest proponents, pointing to the industry’s strong fundamentals and the fact that an economic moat protects it.

Holmes argued that accumulating shares now appears to be a strategic move to capitalize on lower fuel costs, with Brent crude oil prices in freefall this year, as well as coronavirus-impacted travel, which has depressed travel stocks including airliners. Fuel remains one of the biggest expenses for airlines, and those not already hedged to prices could see benefits from lower costs due to the Russia-Saudi Arabia production dispute.

Furthermore, Holmes argued that the domestic airline industry could enjoy the boost from fiscal stimulus in the wake of the novel coronavirus or COVID-19 epidemic. National Economic Council director Larry Kudlow hinted that the U.S. government is considering “timely and targeted micro-measures” for specific industries, including airlines.