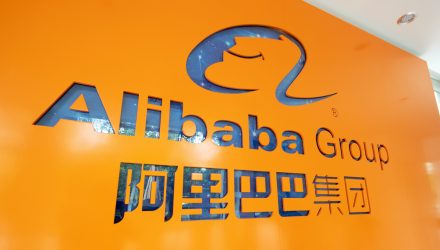 Meanwhile, Alibaba plummeted 13.2% and also broke below its long-term support at the 200-day simple moving average in its biggest one-day percentage loss on record. BABA makes up 16.3% of MCHI’s underlying portfolio and 14.0% of GXC.

Alibaba and affiliate Ant Group Co., both companies that are overseen by billionaire Jack Ma, was summoned to a high-level meeting over financial regulations, Bloomberg reports. Beijing has been trying to rein in the increasingly influential internet giant. The recently drafted anti-monopoly rules released November provided the government a wide reach to restrain entrepreneurs whom enjoyed unusual freedom to expand their influence.

The Alibaba inquiry is “a warning that winds have shifted,” Bloomberg Intelligence said in a research note. Analyst Vey-Sern Ling argued that business operations “could face long-term headwinds” as a result of such moves.

Alibaba said it will cooperate with Chinese regulators in their investigation, and operations will remain normal.

Alibaba and rivals like Tencent Holdings Ltd. are facing increased scrutiny from regulators after attracting hundreds of millions of users and gaining influence in the everyday lives of Chinese netizens.

The anti-monopoly rules could threaten upend the industry with a range of potential outcomes, such as a benign scenario of fines to a more drastic breakup of industry leaders. Some analysts predict a crackdown is in the works but a targeted one, pointing to language in the regulations that suggests a heavy hand on e-commerce,