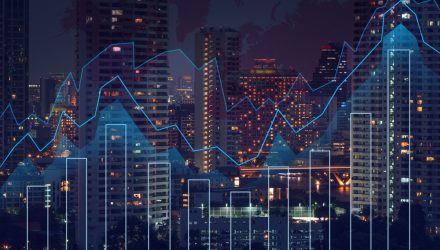 The $4.35 billion XSOE isn’t perfect as it allocates 30.3% of its weight to Chinese stocks, but that’s below the weight to the world’s second-largest economy found in the MSCI Emerging Markets Index. Obviously, that also means that XSOE isn’t a dedicated China exchange traded fund and, these days, that’s a plus for investors.

“Sheng’s comments suggest that the effort could extend to new firms. Regulation of shared economy or smart delivery applications could impact Meituan, for instance, while Baidu Inc. has worked on autonomous driving and Alibaba Health Information Technology Ltd. and JD Health International Inc. do business in the online health sector,” according to Bloomberg.

Those stocks combine for about 13% of XSOE’s weight. Fortunately, XSOE augments some of that risk by way of exposure to countries that are far less drunk with regulatory ambitions than China. For example, Taiwan and India, which are more investor-friendly destinations, combine for about a third of XSOE’s roster.

India is home to one of the best-performing equity markets in developing economies, with a large part of that upside being driven by contributions from growth stocks, including some XSOE components. Likewise, Taiwan has one of the most tech-heavy equity markets in the world, and as a rival to China, it’s highly unlikely to pursue regulations that stifle innovation and harm investors.

The same goes for South Korea, which accounts for 15.53% of XSOE’s weight. None of these three countries are likely to crack down on tech and internet companies on par with China. These days, emerging markets investors should be prioritizing relief from regulatory headwinds.

“China has ramped up the campaign with a series of monopoly probes into internet companies, a record fine for Alibaba Group Holding Ltd. and new demands on leading digital firms like Tencent Holdings Ltd. The country is pushing its tech titans to share their data troves, open up their platforms to greater competition and support opportunities for smaller businesses,” reports Bloomberg.