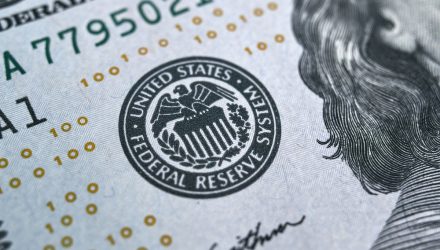 WisdomTree Talks Fed Policy and the Possibilities of a “Pivot-Lite”

The Fed has raised interest rates by another 0.75% with the Fed Funds range now between 3.75%-4% and Federal Reserve Chair Jerome Powell cautioned that rates still have further to go, putting to rest any bullish hopes of a pause in hikes anytime soon.

“We still have some ways to go and incoming data since our last meeting suggests that the ultimate level of interest rates will be higher than previously expected,” Powell said in the post-FOMC meeting press conference.

With that said, Powell did indicate that the Fed could consider the possibility of slowing as early as December’s meeting but that a pause is not on the agenda for the near future. It will largely come down to economic data and reports. A resilient jobs market and persistent core inflation have supported the rapid tightening that has happened this year.

“While the money and bond markets seem to be caught up with whether Powell & Co. will move to a 50- or 75-bps rate hike at the December FOMC meeting (‘Powell Pivot’), I feel the focus should be on what the terminal rate is going to be and how long will it stay there,” wrote Kevin Flanagan, head of fixed income strategy at WisdomTree, in a recent blog post.

The “Volcker-esque” Fed Regime Could Ease

The Fed Funds target has far surpassed the last rate hike cycle’s highest point of 2.5% between 2015-2018 and is at the highest level since 2008 Flanagan explained. Rates this year were at 0% as late as March and the rapid hiking is something Flanagan describes as “Volcker-esque” with how aggressive it has been. Under Volcker, interest rates hit 20% to combat the 14% inflation of the late 1970s and ‘80s.

Rate increases in this range aren’t uncommon historically. As recently as 2004-2006, the Fed raised rates 4.25% under Greenspan and Bernanke but those increases were “more methodical, coming in at 25-bps intervals at consecutive FOMC meetings,” Flanagan wrote. 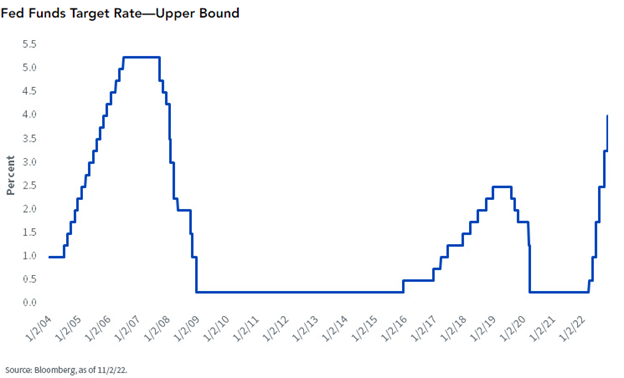 Churning away in the background of the aggressive rate hiking cycle this year is quantitative tightening that now has the Fed shedding $95 billion a month in bonds from its balance sheets. Because CPI, core CPI, and the jobs reports are all backward-looking indicators (some more than others), the Fed’s monetary policy that is based heavily on that data is inherently backward-looking as well. It’s within reason that the Fed could continue rate hiking but at a less aggressive rate beginning in December.

“In my opinion, the real Powell Pivot will be when the Fed begins its messaging surrounding the timing of rate cuts. For the time being, labor market and inflation data will more than likely keep the Fed on a path for continued rate hikes into 2023,” Flanagan wrote. “Against this backdrop, if the policymakers do begin to dial back the size of their rate hikes going forward, maybe we could call it ‘Pivot-Lite.’”