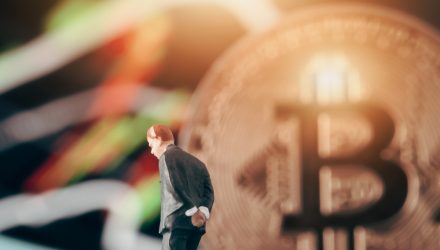 Why Bitcoin Futures Make Sense in This Commodities ETF

In one of the exchange traded funds industry’s most widely anticipated events in recent memory, at least one bitcoin futures ETF is coming to market, and that could soon be followed by several more.

The ProShares Bitcoin Strategy ETF (BITO) is linked to bitcoin futures, and it’s expected that several following funds that could be approved and debut soon will follow a similar approach. Noting that bitcoin futures have been around for several years, the market is increasingly robust, and related ETFs are coming to market, it makes sense that some futures-based commodities ETFs want in on the act.

The WisdomTree Enhanced Commodity Strategy Fund (GCC) already joined the party as WisdomTree announced last week that the actively managed GCC could allocate up to 5% of its weight to bitcoin futures.

“The 3% allocation to bitcoin futures was made from the Fund’s position in gold, which stands at approximately 9% after the rebalance. This move was motivated by the view that bitcoin is often compared to ‘digital gold’ as a store of value and use case, which is being expressed for GCC via bitcoin futures,” says WisdomTree analyst Jianing Wu.

While the supply of bitcoin is fixed and, at least in theory, the same isn’t true of gold and other commodities, there are still supply and demand dynamics at play with bitcoin, making it a logical addition for ETFs like GCC.

“Going forward, bitcoin’s pricing could gradually shift toward the demand side, similar to gold’s, which depends on how much the system is used and how successful it is in evolving into a store-of-value vehicle,” adds Wu. “However, investors who believe in such, must have an appetite for short term volatility and risk. The risks such as regulatory uncertainties, price speculations, and technological development difficulties must be kept in mind of.”

Another reason the pairing of GCC and bitcoin makes sense is that, historically, commodities aren’t highly correlated to equities. Since the end of 2017, the Bloomberg Commodity Index has had a correlation of just 0.60 to the S&P 500, but bitcoin is even lower at 0.32.

“We view bitcoin futures as a potentially compelling asset for addition to a commodity strategy such as GCC that seeks to provide returns uncorrelated with equities and fixed income. Historically, bitcoin has a correlation well below 0.5 against most major asset classes,” says Wu.