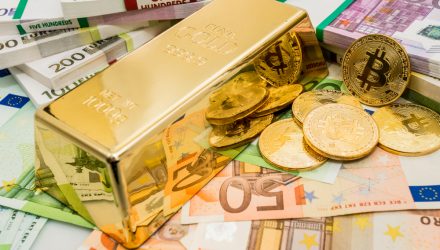 While not the physically backed ETF investors are craving, the SEC appears poised to — perhaps imminently — approved a bitcoin futures ETF based on the cryptocurrency’s futures contracts trading on CME. Potentially, several such products may be approved.

That speculation is contributing mightily to the largest digital coin’s renewed flirtation with all-time highs, and while a futures-based bitcoin ETF or ETFs could set the stage for product evolution in the future, some experts are mulling implications for established ETFs, including the WisdomTree Enhanced Commodity Strategy Fund (GCC).

That’s a relevant conversation because GCC is a futures-based ETF and WisdomTree is making it clear that bitcoin could be part of GCC at some point.

“The Fund may also invest up to 5% of its net assets in bitcoin futures contracts. The Fund will not invest in bitcoin directly,” according to the issuer.

The $191.53 million GCC is actively managed, indicating that it has flexibility, and that flexibility could allow for the addition of some bitcoin futures at some point. Bitcoin would be a departure from the standard assets tracked by GCC, which typically features exposure to agriculture and energy commodities as well as industrial and precious metals futures.

“Institutional investors appear to be returning to Bitcoin, perhaps seeing it as a better inflation hedge than gold,” said JPMorgan in a recent report. “The reemergence of inflation concerns among investors has renewed interest in the usage of Bitcoin as an inflation hedge.”

Additionally, bitcoin makes for a credible addition to GCC because commodities are often used to diversify portfolios and reduce correlations to other asset classes.

“The rise of Bitcoin over the past few years suggests that it could be treated as another type of asset for an individual or institution, serving the role of diversifying investments. It could then try to balance out adverse movements in other asset classes,” according to Business Insider.