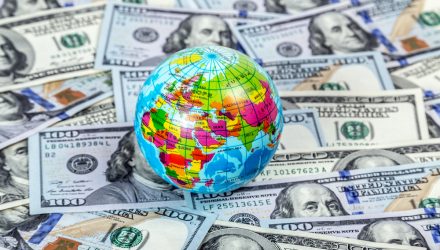 Exchange rates now sit at levels close to pre-Plaza Accord for the British pound, while the Japanese yen is at levels that haven’t been experienced often in the last 25 years, and the euro has broken parity with the U.S. dollar in the last month, explained Jeff Weniger, CFA and head of equity strategy at WisdomTree, in a recent blog post.

“Coming out of the global financial crisis, these four majors—the dollar, sterling, euro and yen—each had CPI-based real effective exchange rates that were largely in balance. As the dollar strengthened over the years, that has changed, with EUR and JPY showing up on the cheap side on this metric,” Weniger wrote. 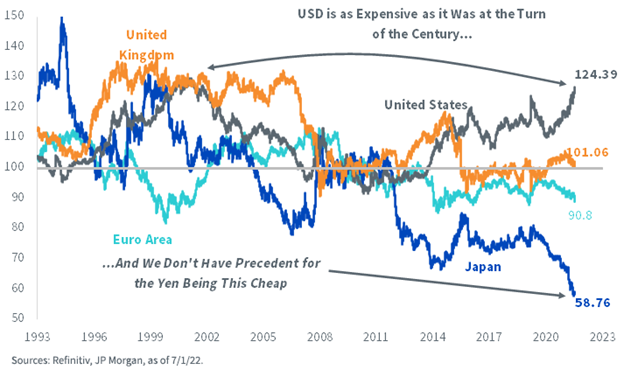 The British pound is currently at a weakness level last seen after the Brexit vote in 2016, and if it continues its current trajectory, it could hit pre-Plaza Accord levels. The yen, while not anywhere near the weakness it saw in the 1970s, when it ran anywhere between ¥200–300 to the U.S. dollar, is still pushing levels last experienced in 2002’s devaluation, and it could conceivably reach the levels of the 1998 aftermath of Long Term Capital Management’s collapse.

In the U.S., the plummeting valuations of the largest growth stocks, seen most easily through the performance of the Nasdaq Composite in 2022, follow a curve with a great deal of similarity to “Stages of a Mania,” as Weniger demonstrated through a side-by-side comparison.

“If the coming years present a scenario in which U.S. stocks must unwind a bull market that got too far out of hand, maybe owning beleaguered overseas markets is the way to navigate it,” Weniger theorized.