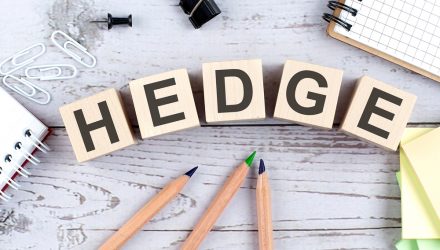 International stocks and the related exchange traded funds have, broadly speaking, trailed U.S. counterparts for more than a decade, save for one-off examples here and there.

Due to the dollar ranking as one of the world’s best-performing currencies this year, that situation is only magnified. In other words, investors deploying unhedged ETFs for exposure to international equities are literally paying a price.

At the regional level, Europe and Japan are two prime examples of this trend. The WisdomTree Europe Hedged Equity Fund (HEDJ) is off 11% year-to-date. That’s nothing to brag about, but it’s vastly superior to the 26.51% shed by the MSCI EMU Index.

Likewise, the unhedged MSCI Japan Index is down 24.7% year-to-date, but the WisdomTree Japan Hedged Equity Fund (NYSEArca: DXJ) is higher by 5.5%, making it one of 2022’s top-performing large-cap developed market single-country ETFs.

Currency-hedged ETFs such as DXJ and HEDJ hold currency forwards to manage long dollar exposure, making these funds relevant considerations in strong dollar environments such as the current one.

“Currency forwards provide an advantage in certain environments. The future exchange rate in these contracts is tied to the interest-rate difference between the U.S. and foreign markets,” wrote Morningstar analyst Daniel Sotiroff. “Hedging adds to the total return of hedged ETFs when the U.S. interest rate is higher than those abroad. However, it subtracts from their returns when the U.S. interest rate falls below foreign rates. They also protect against changes to the outlook of interest rates in the U.S. and abroad. Recently, higher expected relative interest rates in the U.S. aided the dollar’s strong performance even before the Federal Reserve began raising rates.”

As Sotiroff noted, currency-hedged ETFs typically carry higher fees than unhedged competitors. However, slightly higher expense ratios are worth embracing when the more expensive product outperforms its cheaper competitor by more than the fee differential on a risk-adjusted basis.

“Meanwhile, unhedged ETFs tracking stocks from similar markets can be had for less than 0.10%. And there are transaction costs tied to the forward contracts that investors don’t see. Those costs are relatively small, often less than 0.20% in foreign developed markets,” said the Morningstar analyst.

To their credit, DXJ and HEDJ are outperforming the equivalent unhedged ETFs by wide margins this year, and both WisdomTree funds are doing so with notably less annualized volatility than the rival unhedged funds.