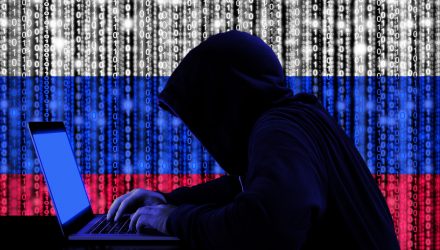 Some assets predictably responded to Russia’s war with Ukraine, which is now into a fourth week. Those include commodities and safe havens like the U.S. dollar.

Owing to Russia’s documented history of cyberattacks, cybersecurity stocks and exchange traded funds are receiving renewed attention amid that country’s invasion of neighboring Ukraine. Take the case of the WisdomTree Cybersecurity Fund (NASDAQ: WCBR). That fund surged 8.6% last week and is modestly higher over the past month, while the S&P 500 is slightly lower.

It’s not a stretch to say that WCBR, which tracks the WisdomTree Team8 Cybersecurity Index, is already proving relevant owing to Russian military (and cyber) aggression.

“On February 23, 2022, CrowdStrike noted, on its blog, the existence of a new wiper malware being used to target Ukraine systems, known as DriveSlayer. According to CrowdStrike, this was the second destructive malware found recently targeting the region, the first being WhisperGate,” notes Christopher Gannatti, WisdomTree global head of research.

Crowdstrike Holdings (NASDAQ:CRWD) is WCBR’s sixth-largest holding at a weight of 4.85%. Against the backdrop of hostilities aimed at Ukraine, WCBR is relevant for another reason: That country is home to a vibrant tech economy of its own — one driven in large part by Western companies — making it an ideal target for Russian cybercriminals.

“Ukraine is a vibrant marketplace for information technology (IT) outsourcing services. Its Ministry of Foreign Affairs notes that more than 100 of Fortune 500 companies rely at least partially on services provided from Ukraine. In fact, Ukraine’s IT export volume increased 36% to a figure of $6.8 billion in 2021, up from roughly $5 billion in 2020,” says Gannatti.

Additionally, Russia has an established history of being a bad cyber actor, with some attacks targeted directly at Ukraine. That includes the 2017 NotPetya attack, which crippled Ukrainian infrastructure, government agencies, and even ATM machines.

Time will tell if WCBR continues proving responsive to the aforementioned geopolitical hostilities. The ETF has just 27 holdings, but that level of concentration could be a plus for investors.

“Cybersecurity is an important enough topic that concentration could be warranted. Diversified portfolios of specific cybersecurity companies would necessarily be more concentrated than broad-based cloud portfolios, but could provide interesting ways for investors to align with those looking to beef up their cyber defense,” concludes Gannatti.