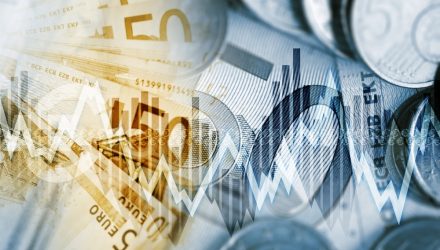 Russia’s invasion of Ukraine is now in its third week, and while geopolitical conflict in Eastern Europe would appear to be a fine reason for investors to eschew European stocks and the related exchange traded funds, some experts argue otherwise.

In fact, it could be the opportune time to consider an ETF like the WisdomTree Europe Hedged Equity Fund (NYSEArca: HEDJ). HEDJ, which follows the WisdomTree Europe Hedged Equity Index, focuses on stocks from Eurozone-based economies, so it has no exposure to Russian or Ukrainian equities. Likewise, the fund has no exposure to emerging economies in Eastern Europe that could be adversely affected by ongoing Russian military aggression.

Adding to the allure of HEDJ is the point that economists expect a decent rate of Euro-area economic growth this year.

“Though the pace of global growth is expected to slow from the post-pandemic economic recovery, the World Bank anticipates that euro area real GDP may grow 4.2% year-over-year in 2022, according to its January forecast. That’s slightly better than the 4.1% real growth expected for the entire world but notably higher than the 3.7% and 3.8% rates expected of the United States and advanced economies categories, respectively,” notes WisdomTree analyst Brian Manby.

Rebounding growth in the region is critical because many European equity benchmarks are heavily tilted toward cyclical sectors, meaning that the region’s stock markets could be responsive to improving economic output.

“The European equity market, as represented by the MSCI Europe Index, is about 45% concentrated in cyclical sectors, comprised of Financials, Industrials, Materials and Energy, with the remainder in GICS® sectors classified as growth or defensive. This contrasts notably with the rest of the world, where the U.S. and other equity regions are more concentrated in non-cyclical industries,” adds Manby.

For its part, the $1.88 billion HEDJ allocates about 48% of its weight to those four sectors. HEDJ’s 38% combined weight to materials and industrial stocks could be a positive this year.

“They are both among the most diversified sectors by geographic revenue of the MSCI Europe Index, meaning they generate large portions of their revenue from outside Europe,” writes Manby.

Then there’s the obvious catalyst. HEDJ is a currency-hedged ETF, meaning that it’s designed to be durable when the dollar is strong, as is the case this year. The greenback could gain strength if the Federal Reserve surprises to the upside with the magnitude of its imminent interest rate hikes, further boosting the case for HEDJ.