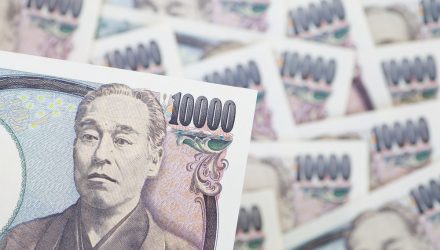 Reasons Mount to Be Bullish on Japan ETFs

Some banks and research firms are growing bullish on Japanese stocks, and that could signal opportunities with exchange traded funds such as the WisdomTree Japan Hedged Equity Fund (NYSEArca: DXJ).

The currency-hedged exchange traded fund is up 17.31% year-to-date, beating the MSCI EAFE Index by nearly 600 basis points. DXJ could be poised for more upside into year-end and into 2022. Count Credit Suisse’s Suresh Tantia, senior investment strategist at the bank’s Asia-Pacific office, is among those who are bullish on stocks in the world’s third-largest economy.

In an interview with CNBC, Tantia highlights some pivotal foundational pieces that are in place to potentially boost Japanese equities.

“Firstly, Tantia pointed to Japanese Prime Minister Fumio Kishida’s resounding victory in the recent parliamentary election, describing the win as ‘very positive for the market’ due to expectations that the country’s leader will introduce more stimulus,” reports Eustance Huang for CNBC.

As Tantia points out, adding to the case for Japanese equities are the facts that stocks in Japan are inexpensive relative to rivals in other developed markets and the yen is weak. The latter point is particularly relevant to investors considering DXJ because the fund, as noted above, is currency hedged, meaning that it capitalizes on dollar strength against the yen — something that many competing ETFs do not offer investors.

“If you look at the valuation for the Japanese equity market, it’s trading at a very attractive price compared to any other developed markets,” Tantia told CNBC. “Weaker Japanese yen tends to be positive for the equity market and we do expect JPY to weaken against U.S. dollar.”

DXJ is levered to the weak yen theme by way of a more than 31% combined weight to the consumer discretionary and technology sectors. In Japan, those sectors are export-heavy, meaning that they benefit from the yen being weak against currencies in the countries in which those companies sell goods.

Impressive earnings momentum and sturdy balance sheets — both of which could facilitate elevated shareholder rewards — are also among the factors that could compel investors to give DXJ and Japanese stocks another look.