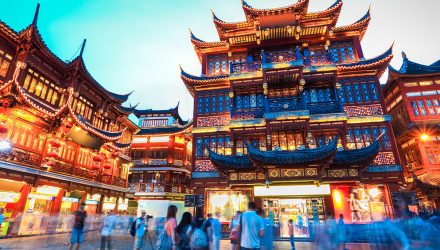 Narratives and Earnings on Chinese Equity: What Changed?

Last week, China’s State Council released a readout of the financial stability and development committee meeting chaired by Vice Premier Liu He. It was a regular meeting but intended to address ongoing financial concerns—namely, the collapsing Chinese stock market, particularly offshore China equities. The market went into an extreme rally in Hong Kong, followed by a significant rally in U.S. offshore China stocks.

The readout was intended to address the common concerns contributing to falling stocks.

It addressed investors’ major concerns on macroeconomic conditions and policies, risk in the Chinese real estate market, the regulation of platform companies and the audit regulatory  relationship between the U.S. and China.

Media headlines here in the U.S. were more positive than the actual Chinese words of the release.

For example, it never said or implied “regulation on Big Tech will end soon,” but that’s one of the headlines all over English media. The readout merely said it  should quickly implement the current plans for large platform companies in a transparent measure, coordinate news releases among departments and not upset the capital market with any sudden news. This means the government has more plans it wants to implement. For example, after Ant Group is asked to spin off the payment part of its business, it is expected Tencent will face something similar.

So, what did the government accomplish?

It did change the narrative away from constant “China Tech Crackdown” headlines.

What did it not accomplish?

It did not change a lingering worry that the Chinese government is losing credibility that it will put economic growth as the highest priority with actual policies.

Specifically, here are the lingering worries:

Russia’s invasion of Ukraine is creating another headwind for China, as it faces the risk of secondary sanctions from the U.S. and European countries.

A decoupling of U.S.-China in key sectors like semiconductors has already begun, with more sectors to come.

Russia is China’s immediate northern neighbor and a major supplier of energy. Broadly defined, China has lost significant territory from Russian pressures over a very long history. There is also an increased mistrust of the U.S., as hundreds of Chinese companies have been put on the U.S. sanctions list since 2016.

Currently, the word China’s been using is “independent” foreign relations, not “neutral,” because it couldn’t and won’t completely cut off from Russia. Anecdotally, just in the last two days, there has been some shift in domestic media toward pro-Ukraine coverage, as China’s president talked with President Biden on March 18.

China’s dynamic zero COVID-19 policy is also still in place, battling Omicron with some lockdowns and mobilized testing, as the high transmission is making it harder to contain like Delta. So far, its impact on manufacturing and the global supply chain is still subdued, as Chinese companies have quickly learned to use Olympic bubble-style management to keep factories open. The impact of the domestic service economy is significant, which will continue to dampen domestic consumption.

For investors, our thesis on China is still earnings. With our free fund comparison tool, we can see that ex-state-owned companies are still delivering significant earnings growth.

We believe the Russian war and earnings are the top factors to pay attention to for China equity. Can Chinese companies continue making money in the face of all these risks?

That’s the most important question for long-term investors.

For definitions of terms in the chart above, please visit the glossary.

For more on this topic, please listen to one of our latest China of Tomorrow podcast, where Liqian Ren speaks with Bruce Liu about global semiconductor industry and China equity.