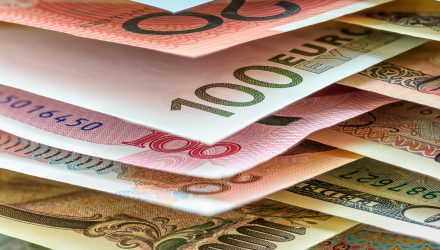 Investors have been hesitant to put money in anything outside of the U.S. But a hedged opportunity makes a lot of sense, given the dollar’s current strength.

Lydon noted that there are a bunch of reasons to look at DDWM. U.S. equities are on sale compared to the highs a year ago, but he stressed that many U.S. investors have domestic bias. According to Lydon, international stocks were on sale at 30%, and international equities have seen a much more muted correction than U.S. equities. Lydon said, “What this ETF does is it selects good companies in developed markets in a diversified way, but most importantly, and this is where the currency hedge comes in if you go back and you look year to date, where would have been an area where you would have made money? Because there weren’t that many. It would have been the U.S. dollar.”

The dollar is at multi-year highs compared to foreign currencies. Given the widespread geopolitical tension, lots of money is coming into the dollar as investors consider it a safe haven. “That’s great,” Lydon said, “However, at one point in time, these foreign markets will come back.” According to Lydon, these foreign companies are still very much on sale, and the dollar’s historic strength combined with the great valuations are an intoxicating combination. “The only headwind they have is that their current currency is so much weaker than the dollar. This strategy does everything to take that out of the equation, so all you are doing is investing in the stocks themselves, and you don’t have exposure to the currency.”

Jaffe sees this as a prime example of “smart beta.” He noted, “this would seem to be a good time to be hedging.”

When markets experience a 20% tumble, the rebound often occurs within twelve months, according to Lydon, and is frequently double digits. “It doesn’t mean it always happens,” he said, “but it’s terrible to think that people would hold off on buying good companies outside the U.S. because they are concerned about the currency risk within those specific companies.”

WisdomTree has done an exceptional job removing the currency risk in this fund, according to Lydon, and when asked by Jaffe if this fund was a way to diversify international exposures, given the hedge angle, Lydon said, “it absolutely is, and I think a lot of people wished they we relooking at these types of strategies a year ago.” As an example of the depth of the discounts, Lydon noted that if a European company is down 20% and the Euro is down 20%, then those ETFs are down 40%.