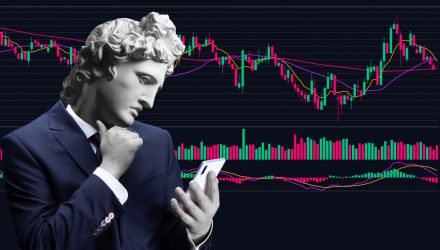 Economic and Market Signals to Watch in the Second Half: Part 2

This is a continuation of the Q3 and beyond outlook for 2022 from WisdomTree. You can find the first part here which covers GDP growth, earnings, and interest rates.

Today’s release of July’s inflation numbers brought a collective sigh of relief from advisors, as overall CPI dropped to 8.5% over June’s 9.1%. Core inflation, which removes energy and food from calculations, remained steady at 5.9% however, indicating that inflationary pressures remain widely spread.

Of the five signals that WisdomTree believes advisors and investors should keep their focus on in the second half of the year, inflation and the Federal Reserve’s policy remain some of the largest drivers of market and investor sentiment. Scott Welch, CIMA, CIO of model portfolios at WisdomTree Asset Management, discussed these further in a Q3 outlook for WisdomTree.

In alignment with the slightly lower broad July CPI report, there are indicators elsewhere that some elements that the persistent inflationary pressures of this year are easing, such as global commodity prices which have seen a substantial drop recently after an incredibly strong performance at the beginning of the year. China is one of the rare exceptions to most economies, engaging in a policy of fiscal easing and monetary stimulus, and if the policy is successful, Welch cautions that commodity prices could experience a bounce back.

“Inflation remains a primary story of 2022 — for now. But it may soon be supplanted by the economy. The Fed turned hawkish earlier this year and initiated an aggressive ‘rate hike regime.’ But now it may rethink its policy in the face of (perhaps) peaking inflation and a (definitely) slowing economy,” Welch wrote. 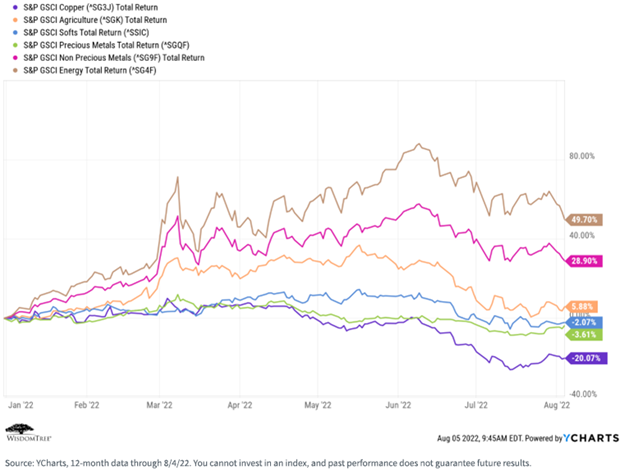 Digging further into July’s CPI report, Jeff Weniger, CFA, head of equity strategy at WisdomTree, shared some of the notable trends seen in this most recent inflation report.

“Something we noticed in the CPI report were big monthly falls in line items that are indicative of consumer health. For example, car and truck rental inflation fell 9.5% in just one month, while airfare (-7.8%) and hotels (-3.2%) weren’t far behind,” Weniger discussed, before going on to break down what it could mean for equities looking ahead.

“This data seems to confirm the view that the consumer has been in acute pain this summer and is cutting back on non-essentials. It bodes poorly for the Consumer Discretionary sector, which is the 2nd largest component of the S&P 500 Growth index. It’s problematic for investors who remain overweight Growth relative to Value,” cautioned Weniger.

The Federal Reserve has taken an aggressive stance in its fight against inflation this year, admitting on several occasions that it will do whatever is necessary to bring inflation down, including driving the economy into a recession, though that certainly isn’t what it wants.

Indicators are growing that the economy is indeed slowing, and elements of inflation are falling. The central bank won’t meet again until September so there will be one more month, but July has brought about a decreased broad CPI print (though core inflation remains the same and is a better indicator of what the Fed looks at), the report of the second quarter of slowed GDP growth, falling commodity prices such as gas as well as energy, and more. Federal Reserve representatives have indicated previously that they are committed to the rate hiking regime, but markets are increasingly pricing in a backing off by the central bank should economic indicators continue to weaken. 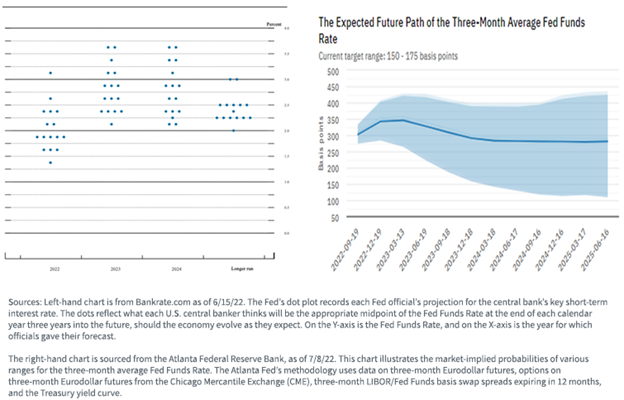 “All eyes are on the Fed. Our base case is that the Fed will maintain its rate hike regime through this year but, despite its rhetoric, we think the Fed may back down should economic data continue to come in soft,” predicted Welch.

Kevin Flanagan, head of fixed income strategy at WisdomTree, had some additional color to add after the release of July’s CPI report and what it could mean for the Fed’s policy and bonds looking ahead.

“The July CPI report could be signaling inflation pressures may have peaked, as the recent decline in energy/gasoline prices work their way through the data. However, core price pressures remain high as the cost of rent (CPI’s housing proxy) remains ‘sticky’ to the upside, which should keep overall inflation elevated in coming months,” Flanagan explained.

“Although the Fed will receive one more jobs and CPI report before the next FOMC meeting, the combined data for July is thus far pointing more towards a 50bp rate hike next month, not 75bp,” Flanagan theorized. “Rate hikes at each of the three remaining FOMC meetings is our base case and the debate over where the economy is headed, inflation and Fed rate hikes should keep the ‘volatility quotient’ elevated for the Treasury market, specifically the 10-year yield.”