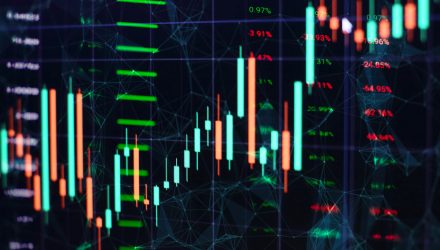 Economic and Market Signals to Watch in the Second Half: Part 1

There’s a lot of noise in markets this year, as inflation remains persistently high, the Federal Reserve hikes interest rates, and volatility continues, with markets seemingly driven by each new economic indicator. Keeping a focus on the five relevant economic and market signals will help investors best maintain perspective according to Scott Welch, CIMA, CIO of model portfolios as WisdomTree Asset Management, in a Q3 outlook for WisdomTree.

The signals that advisors and investors should keep their attention honed in on are GDP growth, earnings, interest rates, inflation, and the Federal Reserve’s policy but for now we’re just going to focus on the first three and leave the last two behemoths for discussion another day.

GDP growth has officially slowed for the second quarter in a row, and the debate has predominantly turned from if recession to when and if that recession will be a shallow or deep one. Consensus estimates have placed annual GDP growth for the U.S. in the ballpark of 0.5%-1% for 2022, while global GDP growth will be slowed but still higher at around 3%.

“A recession is on the horizon. The bears suggest we are already in one, while the bulls suggest we won’t see it until 2023. There remains positive economic news, but many indicators are declining. In the U.S., much will depend on the Fed’s actions and the corresponding effect on consumer and investor behavior,” Welch explained.

Earnings Surprises and Downgrades Ahead

Earnings season is almost over and has largely surprised to the upside with earnings growth, revenue, and “beat rates” coming in mostly in line with their historical averages. While this earnings season has been fairly positive in a challenging economic environment, the language coming from most companies is of muted expectations looking ahead, with most CEOs reporting that they are forecasting earnings reductions moving forward.

“Valuations have fallen to the point where many markets are not as ‘frothy’ as they were at the beginning of the year, but history suggests increased volatility as summer ends and we move into the 4th quarter,” Welch warned. 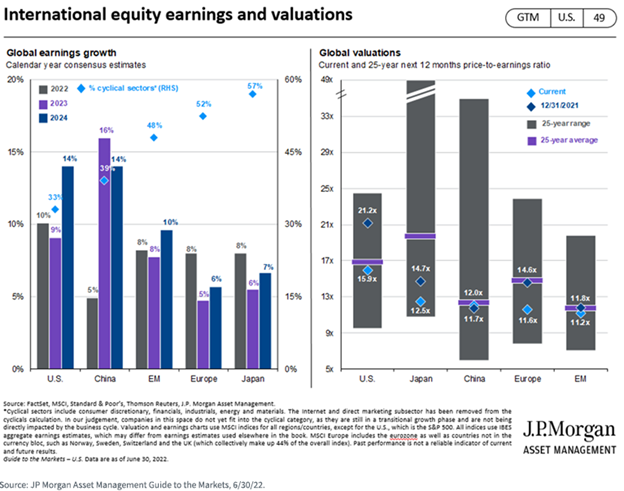 On a global scale, earnings are also anticipated to drop but remain positive for the remainder of the year, with valuations proving extremely attractive in many EM countries but particularly in Japan where the yen continues to weaken alongside a strengthening U.S. dollar.

“We saw a full-blown ‘factor rotation’ away from growth and toward value and dividend stocks in the first half of 2022,” explained Welch. “While we believe this trend will continue, we remain risk factor diversified within our portfolios in case growth makes a comeback, which it has shown signs of doing over the past 5-6 weeks.”

“We also believe “quality” (i.e., companies with strong balance sheets, earnings, and cash flows) may become increasingly important as we sail into the potentially volatile seas of the remainder of 2022,” Welch advised.

Interest Rates and is the Yield Curve Crystal Ball Broken?

Interest rates have become a focal point this year, with great attention being paid to the yield curve. In an environment of rising rates alongside quantitative tightening, attempting to use the yield curve as a crystal ball for a recession has become incredibly complex and more uncertain than ever. The consensus remains that an inversion between the 2-Year Treasury rate and the 10-Year Treasury rate will portend recession, albeit at a 9-18 month lag, but Welch counters that the 3-month Treasury and 10-year Treasury rate are better indicators, and for now remain positive. 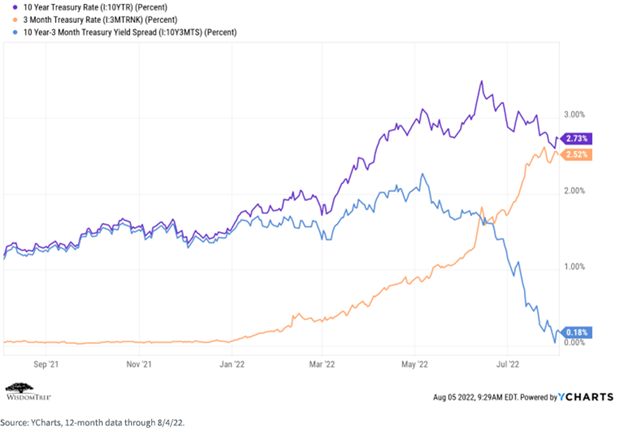 WisdomTree believes there is merit in floating rate Treasuries in the current environment as the yield curve flattens because it can mitigate taking on unnecessary duration risk that becomes more prevalent in a flattening curve environment. Credit spreads have also made a comeback this month and have aligned once more with their long-term averages, but selecting quality remains tantamount.

“We remain short duration and overweight quality credit within our fixed income portfolios, relative to the Bloomberg Aggregate index. We are comfortable there for now and would rather be ‘late than early’ to increasing duration—there’s not much to lose right now by staying shorter,” Welch explained.

You can find the second part here.