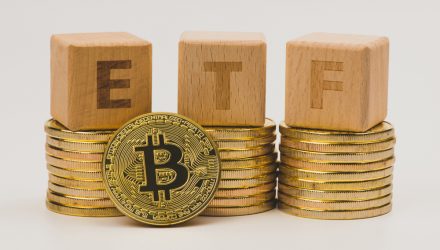 Friday was a busy day on the Bitcoin exchange traded fund front as Kryptoin Investment Advisors filed a registration form for a Bitcoin ETF. That means there are now eight such applications before the Securities and Exchange Commission (SEC).

The commission also revealed its evaluating WisdomTree’s proposal to introduce a bitcoin ETF – something the issuer has had success with in other markets.

See also: Coinbase Valued at $100 Billion as Its IPO Approaches

Is It Finally Time for a Bitcoin ETF?

With Bitcoin and other cryptocurrencies captivating investors, talk is again increasing about the prospects for a Bitcoin exchange traded fund.

Multiple bitcoin ETFs recently debuted in Canada, and related exchange-traded products have existed in Europe for some time.

While the ETF market has been anxiously awaiting a Bitcoin ETF, the SEC has turned down all related proposals. Investors and the digital currency universe are hoping a change in leadership at the SEC could bolster Bitcoin ETFs’ chances of success. Positive regulatory developments may also serve to hasten the ETF approval process, or at least make an approval more likely.

See also: Grayscale’s Bitcoin Trust Will Be Converted to an ETF

“Outside the Commission’s purview, the regulatory landscape has changed significantly since 2016, and cryptocurrency markets have grown and evolved as well,” according to the SEC document. “The market for bitcoin is approximately 100 times larger, having recently reached a market cap of over $1 trillion. As of February 27, 2021, bitcoin’s market cap is greater than companies such as Facebook, Inc., Berkshire Hathaway Inc., and JP Morgan Chase & Co. CFTC regulated bitcoin futures represented approximately $28 billion in notional trading volume on Chicago Mercantile Exchange (“CME”) (“Bitcoin Futures”) in December 2020compared to $737 million, $1.4 billion, and $3.9 billion in total trading in December 2017, December 2018, and December 2019, respectively.”