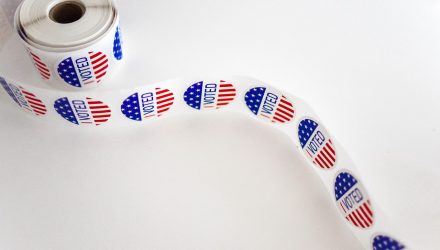 Midterm Elections Could Be a Turning Point for Stock ETFs

U.S. stocks and ETFs have suffered a blow ahead of the midterm elections, but after all the political hoopla, equities could be in for a smoother ride.

The SPDR S&P 500 ETF (NYSEArca: SPY) tested correction territory and is now down 6.8% so far this month and up 3.2 year-to-date. After the October volatility, things could be turning around.

Since 1946, there have been 18 midterm elections, with stocks rising higher 12 months after every single midterm vote, despite the various political party combinations in the White House and Congress, writes Stephen McBride for MarketWatch.

Since the mid-20th century, stocks have on average gained 17% in the year after a midterm. The results are even more noteworthy if one is measuring from the yearly midterm lows – from their lows, stocks surged an average 32% over the following 12 months.

Furthermore, the third year of a presidential term has historically been the strongest year for stocks as well. The second year of the presidential cycle was topically the worst for stocks.