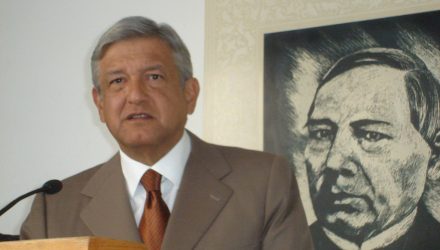 The Mexico country-specific ETF has been gaining momentum in recent weeks, but quickly tumbled Monday after leftist presidential candidate Andres Manuel Lopez Obrador beat his competition while his allies picked up the majority of congressional seats.

Andres Manuel Lopez Obrador, or better known by his initials AMLO, garnered over 50% of the vote in an election held Sunday, compared to his closest rivals’ 23% and 15% of the total, respectively, CNBC reports.

A New Era for Mexico?

However, observers are wary that the far left President could push for tougher negotiations between Mexico, the U.S. and Canada under a new NAFTA deal in a time when trade relations are worsening.

“In many ways, it’s going back to the era before NAFTA in Mexico,” Carlos Gutierrez, former U.S. Commerce secretary, told CNBC. “I don’t think he’s going to make the negotiations any easier because a lot of what he would like to do will bump up against NAFTA.”