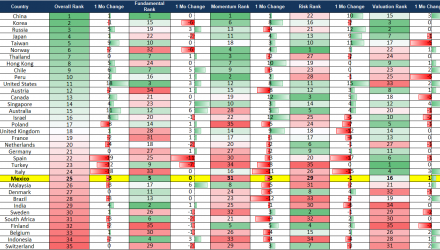 In December I wrote an article entitled How Mexico Elections Could Affect Portoflios. The general theme at that time was to maintain a very cautious approach to holding or buying Mexican assets due to the probability that a populist candidate with potentially unfriendly market policies would be elected president. That July 1 election date is fast approaching and an update is warranted.

There are three main candidates in the race; Jose Antonio Meade (PRI), Ricardo Anaya (PAN), and Andres Manuel Lopez Obrador (MORENA). Lopez Obrador, or AMLO as he is known, has narrowly lost the last two elections with cries of fraud causing violence and protest. As polls show currently, he is a strong favorite with polling numbers in the high 40s and a 20 point lead on Anaya. The most positive outcome, currently, is that somehow Meade or Anaya win. However, with the lead so large and using history as a guide, even that scenario seems likely to end up with negative outcomes due to the serious protests and disruptions that are likely to ensue.

The more probable scenario is that AMLO wins and the markets have to deal with the fallout. Of course, it is not known what that fallout would be precisely, but this candidate runs a highly populist campaign with a platform that could include renationalizing the energy sector, turning his back on NAFTA and other US-linked agreements, while pursuing fiscal and social policies that would definitely upset the business class and status quo. His proponents are trying to paint him in a more friendly light, but there is considerable doubt that he will be anything other than hostile towards business and markets. Where he fits relative to Chavez or the perception of Lula during his 2002 campaign is not yet known, but he is on the spectrum; so there is risk to financial markets.

Related: What is Behind China’s Top-Ranked Fundamentals?

Someone on the Accuvest team is in Mexico several times a month consulting and advising on the financial markets. Many of the political conversations we have include commentary that borders on hyperbolic.  Often times that kind of embellishment makes us think that the risk is fully priced in to the market. However, there is still too much uncertainty about what kind of policy outcomes we might see. Also, unfortunately, it is a little difficult to see much upside in any kind of scenario; expectations of a bounce or reversal seem unrewarding.