You are at:Home»Investing»Melinda Gates Offers Her Views on Warren Buffett Advice 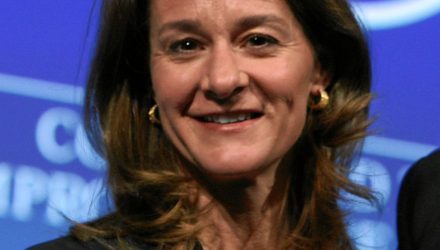 After graduating from Duke University with degrees in computer science and business, Melinda Gates had her pick of a plethora of companies. She ended up following the guidance of an IBM hiring manager however, that rather than join IBM, she should instead to take a job at an up-and-coming company called Microsoft, if she had the opportunity.

“The chance for advancement will be incredible there,” she recalls the hiring manager saying. “IBM’s a great company, but Microsoft’s going to grow like mad. If you have the talent I think you have, the chance you will have there to advance as a woman will be meteoric.”

The rest we know, is history.

In addition to her work at Microsoft, where she removed barriers for women received her a unique perspective on the challenges women face in the tech industry and around the world, her humanitarian efforts have been unparalled as well.

In an interview with Jenna Goudreau on CNBC, Gates offers her perspectives on a number of topics from Warren Buffet to where to spend money.

Discussing the best piece of advice Gates received from the Oracle of Omaha, she replied, “Believe in yourself, you’re doing the right thing,” is what Warren Buffet told her.

When asked what she and he husband would never spend money on, Gates commented, “Let me think about that. We refuse to spend money on plastic straws.”

Goudreau asked Gates what she would have liked to study if she could start school anew, and she exhorted the benefits of biotechnology: “I would go into the cross between biology and technology. That is just gonna change our lives. And to me that’s just a really exciting space.”

Finally, Gates is a well-known proponent of gender equality and racial equality. She gave this take-away for the audience during the interview:

“I want them to know that society would be better off if we lift up everybody: we lift up women, we lift up people of color, that if we give people equal voice in decision-making, and seats at the table, society overall is gonna be better off. And what I want people to know is that it’s totally possible.”